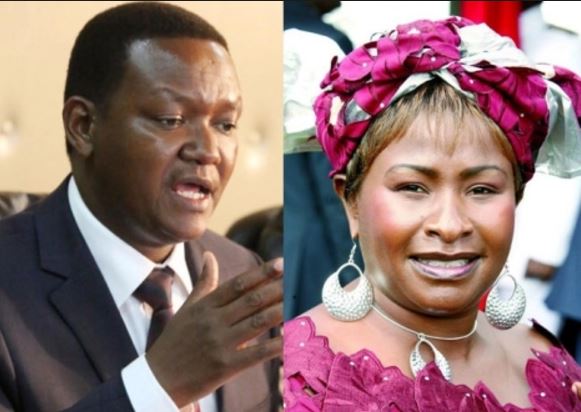 According to Mutua, Ndeti is “running away from public scrutiny” having dodged three debates.

The most recent debate was scheduled for yesterday and organised by KTN.

In a statement released Wednesday, Wavinya said she would not be able to attend the debate because she will be launching her manifesto today.

She said her manifesto shall be the basis of any future debate and therefore attending the KTN debate would mean she had nothing to share with the people.

But in a statement to the public via his social media pages, Dr Mutua says Wavinya’s ideas need to be examined by the common mwananchi.

It is unfortunate that once again Hon. Wavinya Ndeti has declined to participate in a neutral organized debate so that she can explain her agenda and answer pertinent questions. The debate was slotted for today evening on KTN. This is the third scheduled debate she is dodging.

The seat of Governor requires someone who is willing to be interrogated, put on the spot and who has nothing to hide. Wananchi need opportunities to gauge for themselves by seeing the true colours of a Gubernatorial Candidate. Her ideas, like mine, also need to be cross examined by voters.

To this end, I urge Hon. Ndeti not to run away from public scrutiny. Indeed there are serious issues that she needs to clarify especially in regard to her plans for displacement of Kenyans residing in Machakos county on account of their tribe, illegal land acquisition, sabotage of my Government projects, theft and other activities bordering on international crime.

Kenya needs transparent leaders who have a clear development plan for Wananchi not empty rhetoric, baseless accusations and innuendos.

That, after all, is what I stand for and what Maendeleo Chap Chap is all about.