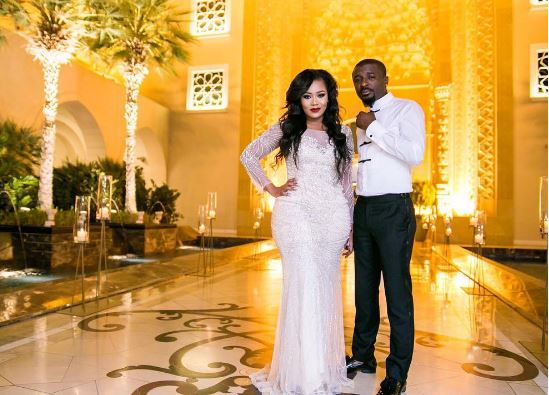 Vera Sidika has taken to Instagram to share with her 590K followers the drama involving her relationship with her Nigerian ex-boyfriend.

This comes after the Nigerian allegedly leaked a nude photo of her breasts on the interwebs.

According to Vera, her ex-lover has been keen on ruining her reputation after she ended their short-lived relationship.

She began the melodramatic rants with a post that reads:

“I don’t know anyone who can tolerate B.S like I did, get publicly ridiculed over a lie & still ignore it all!
I have tried so hard to be calm. I had promised myself a peaceful & calm break up I remember telling my ex I don’t want drama just want us to go separate ways peacefully without social media bUllshit. But nope! his aim was this! To drag my name & image.

I remember him saying he will make my life miserable. I remember him saying he will do drama. I remember him saying he’s gonna use people, my enemies etc for drama to bring me down coz doing it himself would make him look bad. I never wanted to believe all this until I got numerous screenshots a week back that he’s being going about blogs claiming he dumped me. Which is a lie. I ended the relationship. But that doesn’t matter, that’s why I ignored when people sent me the story. But dude! I shared images with u in confidence & u do this? ??? really! Honestly, wether u leaked my nude pics to blogs or sent to your friends who passed it around & it ended up on blogs. It’s just WRONG!! Nobody should do such to someone they claim they once loved. No one! I was minding my business. I was calm. But u just pressed the wrong button!

All I wanted was to ignore & let it fade away but I think the world deserves to know the TRUTH!
I officially ended my relationship on May 11th as you can see & it’s been nothing but hell for me. Deep in my mind I slowly wanted out. when I left dubai in January I got back to kenya the first thing I did was delete pics from IG coz I felt I have sacrificed enough & cant continue doing so for someone that doesn’t appreciate it. No relationship is easy. May-This was the time I wanted no more & after my break up when asked on a tv interview if I’m in a relationship all I did was say I’m single! That’s when drama started. My ex started sending me texts claiming I publicly embarrassed him for saying I’m single! In an interview done 2 weeks after. I still don’t know his motives but whatever it is. This was part of his plan.”

Vera went on to share screenshots of their conversations, accusing the Nigerian of being full of lies.

“He goes around saying sh*t about me. Creating lies after we broke up. And when I said ok tv I’m single he attacks me for saying that. Saying I disgraced him for claiming single. Saying he will do drama on me, get someone to use & do drama. I’m just sick and tired of this B.S ?.“ 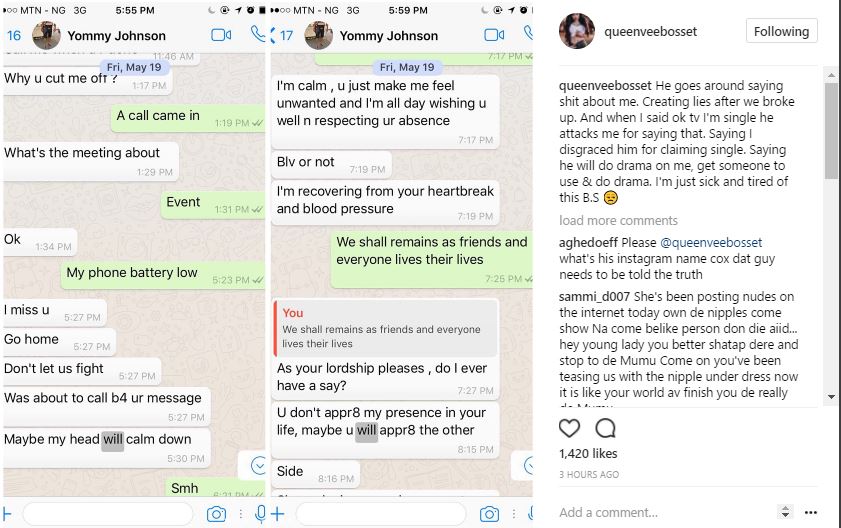 “I remember the first time I shared pics on social media out of excitement both of us had. The response was all negative. Kenyans who lived in dubai said so much about you and I assumed they were hating. I heard so much but chose to ignore it all. Even with ignoring it I was still careful. Careful with my heart. Careful not to fall victim. Careful not to put myself in trouble. Just wanna tell y’all that warned me from day one. Thank you. I’m not perfect. Sometimes in life. Love controls us. We do things out of love. We choose to overlook so many things coz of love. We settle for less than we are used to coz of love. I made so much sacrifice in this. People that know me know I lived recklessly coz I never wanted marriage and didn’t care about how I lived. But once again. I got into a f*cked up situation.” 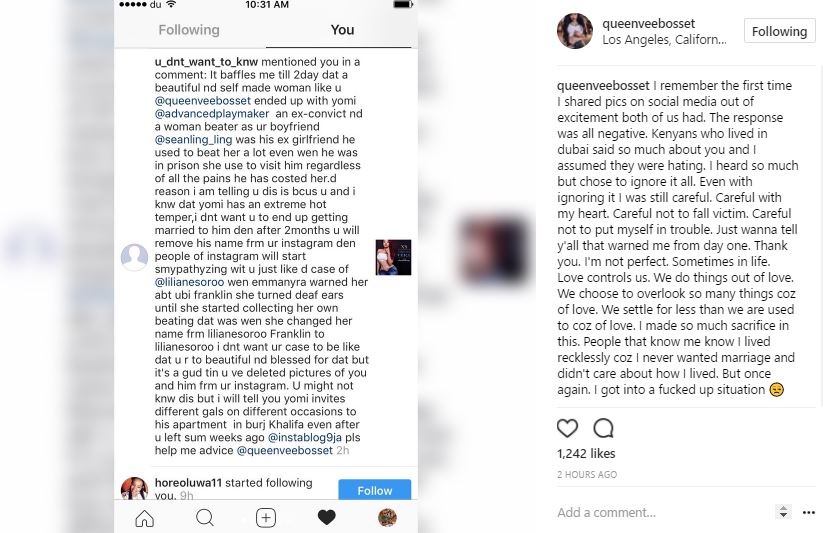 She was not done there.

This is the problem. When u deal with someone that lies for a living. creating fake documents, fake cheques, lie to old women, photoshop paperwork and texts. This is what happens. All he does is lie. He sent me DM just now claiming he doesn’t have my nude. Like wtf. Why u gotta lie ? my entire relationship was based on lies left right and center and u got angry coz I said I’m single on a tv interview. Wtf was I to say ? and y’all saying stop bringing matters on IG. Na. When i was dating him I brought it to IG. Now that he chose to do this I brought it back to where it started IG. So cut it!

Nyashinski Asked What His Next Song Should Be About, What this Guy Said Will Crack you Up < Previous
Newest Betting Millionaire Dreamt of Winning Jackpot and Victories for Uhuru, Sonko and Baba Yao Next >
Recommended stories you may like: