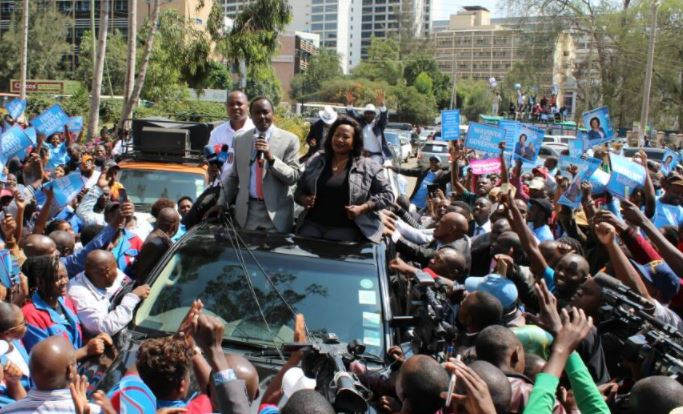 It was a huge boost for Kalonzo Musyoka and Wiper party yesterday after their candidate for the Machakos gubernatorial seat, Wavinya Ndeti, was cleared to run.

The High Court overturned an earlier ruling by the Independent Electoral and Boundaries Commission (IEBC) Tribunal barring her from running for the seat.

The IEBC’s disputes tribunal had ruled that Wavinya committed an electoral offence by being a member of two political parties, namely Wiper and her own Chama Cha Uzalendo, and therefore nullified her candidature.

But at the Kilimani Law Court yesterday, Justice George Odunga, ruled that the IEBC Tribunal had no powers to nullify the decision by the Political Parties Disputes Tribunal that cleared Wavinya to vie for the Machakos governor seat on a Wiper Party ticket.

In his ruling, Justice Odunga further faulted the IEBC for not investigating the coalition agreement between the Chama Cha Uzalendo and Wiper party.

After the ruling, an emotional Wavinya Ndeti was spotted making the sign of the cross to thank God.

Speaking to journalists, she said that IEBC could have consulted with the relevant authorities to save them this shame.

“IEBC need to be fair, if they could have consulted the Registrar of Political Parties, we could not have reached here. Today it has been seen that Kenya is bigger than Chebukati. All this is now the past I have forgiven IEBC, and I urge them to conduct free and fair elections in August. I want to thank people of Machakos for standing strong with me,” said Wavinya.

#MachakosDecides . Above all I thank Almighty God and people of Machakos for their continued support. To IEBC; I FORGIVE you. pic.twitter.com/JjC25gCYku

Here are some of the comments following the land,mark ruling.

Trust Me: Wavinya Ndeti will be the next Waiguru if elected as Machakos County Governor, I don’t trust this lady, better Mutua or Lemi Muia

Wavinya Ndeti is the next Machakos Governor this is not debatable.

Can Opponents & Mercenaries hired to stop Wavinya Ndeti end their futile schemes? Wavinya Ndeti is the next Governor of Machakos. Period.

How @DrAlfredMutua reacted when he heard that @Wavinya_Ndeti has been cleared by the court to vie for Machakos governorship pic.twitter.com/Lp14OedbIi

Someone will be back shooting movies pretty soon,Wavinya Ndeti will get the job done!

What Did Dr Alfred Mutua Do To Deserve This Forthcoming Shameful Defeat By Hon. Wavinya Ndeti??

This is how Gov. Alfred Mutua was when he received news that Wavinya Ndeti will be in the ballot come August 8… pic.twitter.com/yl55jpXbUi

Hilarious Meme Compilation (Thursday June 22) < Previous
All The Trending Images This Thursday Next >
Recommended stories you may like: