Julie Gichuru: “I Choose To Support Uhuru and You Will Not Bully Me into Supporting Your Candidate” 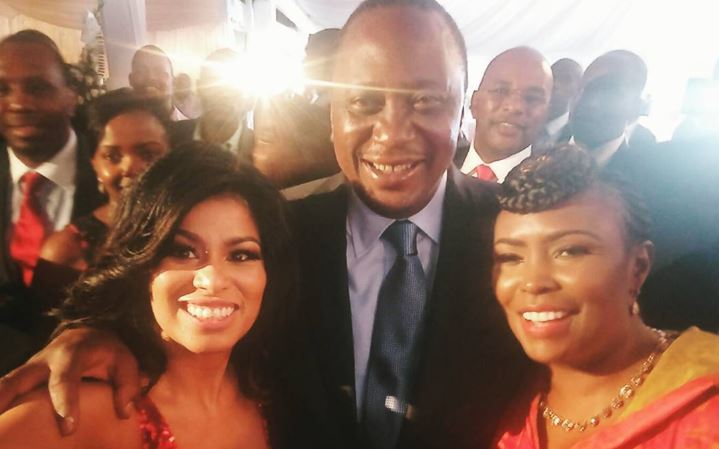 Media personality Julie Gichuru has come out to publicly endorse President Uhuru Kenyatta for a second term. Together with fellow media girl Caroline Mutoko, Julie was the MC on Friday night during a fundraising dinner for the President at Safari Park.

She took to Instagram to make this announcement alongside the above picture.

“Totally inspirational evening with President Uhuru Kenyatta as we gathered to support his re-election bid. @caroline.mutoko shared amazing audio from his 2002 campaigns, his focus even then was a united Kenya, peace, movement from absolute centralised power to a devolved system and free education.

Thank you to all those who made time and to so many more who are supporting the campaign via mobile money. We must believe in something and I believe in one Kenya, I believe in progress and strong effective partnerships to actualise development, I believe in each of us exercising our individual rights to vote, and I believe in respecting that right and loving you as my Kenyan brother or sister whatever the outcome, I believe in working together to make this nation rise to great heights of progress and prosperity for all.
Wherever you stand politically, God bless you and God bless Kenya. Twende mbele pamoja “

Read: Did Julie Gichuru Drink Herself Silly and Even Peed on Herself? She Speaks Out

Among other journalists who have openly taken sides are James Smart, Mohamed Ali and Dennis Onsarigo – all of whom support Nasa leader Raila Odinga.

Predictably, Julie’s announcement irked a section of her supporters, who are of a different political opinion. A lot of insults were hurled her way.

It is not uncommon for Kenyans to consider anyone supporting a different choice from their own as tribal, stupid or have simply received a brown envelope. All the while considering themselves wise, nationalist and illuminated.

But Julie was not prepared to take any nonsense. After the comments became too heated, she posted again.

“Dear Kenyans, I will say this as simply as I possibly can, we are in this nation together. If you cannot see the progress that has been made you have clearly chosen not to. Yes, there has been progress. Are there challenges?

Yes, of course there are and both @caroline.mutoko and I speak openly and widely about them – from corruption to tribalism and much more. ION, I exited the news cycle close to two years ago (fascinating that you barely noticed as you keep discussing me in the context of news) and have the right to comment and take a position on issues.

You cannot BULLY people into your chosen stand and if you cannot respect the fact that people can take a stand that is not based on personal benefit, then that speaks volumes about you not the person you are attacking. Bimbo insults don’t work either, for women who have carved the space that we have, sorry, it does not apply and again speaks volumes about the mindless misogyny of the abuser.

For those sharing civilised perspectives, all are appreciated. Let’s engage in a civilised fashion but most of all, let us respect each others views. I have love for you irrespective of where you stand and it is my prayer that you can adopt that same attitude towards your fellow Kenyans. If you can’t, what does it say about you? God bless Kenya always ?????????”

Also Read: POLL: Should Julie Gichuru Involve Herself in Gambling?

Too Embarrassing! This Guy Proposed at a Nairobi Fast Food Joint and It is Painful to Watch (VIDEO) < Previous
The Hottest Stories on the Internet Today (Wednesday June 14) Next >
Recommended stories you may like: