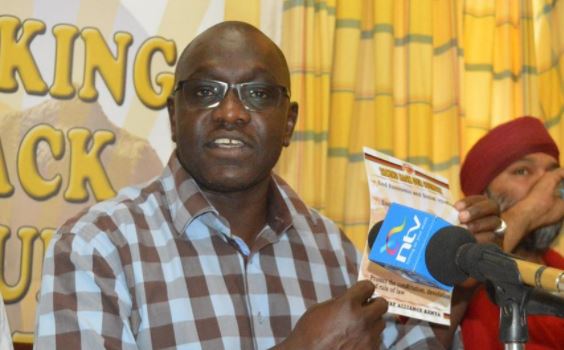 The other day, we had one who allegedly tried to commit suicide at KICC. And just to get  sense of how much daily drama we go through as Kenyans, that was not news enough to trend for 2 days.

The constitution states that if a presidential candidate or a running mate dies before the election, it must be postponed. God forbid but you can imagine the crisis this country would get into, all because of somebody who would have probably gotten .0001% of the vote.

Dida, Nyagah and the rest of the candidates have been making calls to the police demanding bodyguards be assigned to them. So far Inspector General Boinnet is yet to comply. If it were up to me, I would lock up all candidates in their houses until August, with the exception of the top 2. It might end up saving the country billions.

Too bad I have no say.

Speaking of holding the country hostage, Thirdway Alliance Kenya candidate Ekuru Aukot is breathing fire over the possibility of being left out of the live TV presidential debates.

Apparently, the leading broadcasters are contemplating holding a TV debate for only Uhuru and Raila. Ekuru is having none of this, and has sounded a warning to them.

“The media owners of @KTNKenya, @citizentvkenya & @ntvkenya have plotted to make presidential debate as a “two-horse” race. We’re watching” he tweeted yesterday.

You may think that this is a harmless statement, but remember even last time the plan was to have only the main candidates, but the other jokers led by Paul Muite rushed to court to have the debate canceled since they were not invited. The result was the crowded fiasco we witnessed.

This time round Kenyans are wiser about people like Dida who pop up every 5 years to steal the show in the debate, in the process reducing crucial airtime that should go to the ‘real’ candidates.

We should borrow a leaf from the US where every candidate not doing well in the polls is ignored like a white crayon.

The sad part is they might actually succeed and be included in the debate.

The even sadder part is that State House has already hinted that Uhuru will not participate if the debate involves anyone other than Raila.

If the other 6 candidates are so desperate to get on TV, I think they should have their own separate one organized. I’m sure they are just a phone call away. Larry Madowo can probably host them on Sidebar.

Watch: Ababu Accuses Raila of Cleansing Corrupt Opponents into Angels Once They Join Him < Previous
I Took The SGR on Wednesday… This was My Experience Next >
Recommended stories you may like: