A cow in Holland has predicted a gloom outcome for Manchester United in tonight’s Europa Champions League final.

The cow by the name Sijtje is famous in Holland for correctly predicting major football games. According to The Sun, Sijtje has an 85% success rate in her predictions. 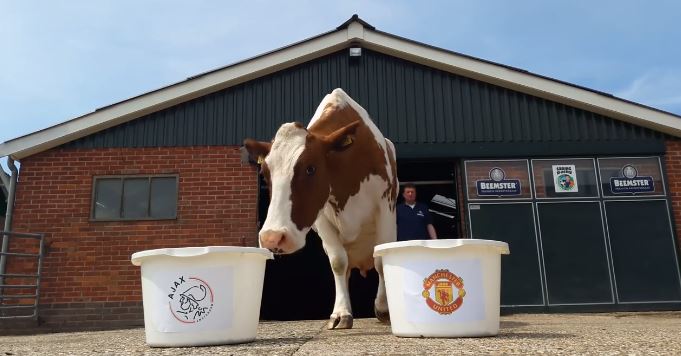 Her handler typically fills two buckets with food, each with the club emblem on the front. Sijtje is then let out of the enclosure and whichever bucket she feeds on first translates into a win for that club. It’s the same concept used by the super-successful Paul the Octopus during the 2010 World Cup.

Sijtje sensationally predicted that Holland would beat Mexico in the 2014 world cup.

But it was probably the Dutch election where she cemented her reputation. Out of 11 buckets representing the presidential candidates, Sijtje went on to pick the eventual winner.

The world will be watching tonight to see whether Paul the Octopus finally has a worthy successor.

Watch the clip of the prediction above.

Hilarious Meme Compilation (Wednesday May 24) < Previous
RAW VIDEO: Watch Moment Motorist Fought with a Traffic Officer in Nairobi Next >
Recommended stories you may like: