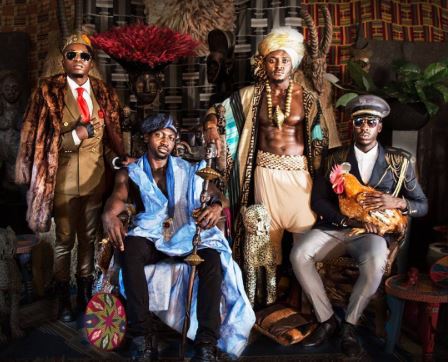 The high-flying hitmakers won two awards at the fifth edition of the HiPipo Music Awards, held in Kampala at the Kampala Serena Hotel.

The two awards were for the mega collaboration with Tanzania’s Ali Kiba ‘Unconditionally Bae’. The song won the categories: Song of The Year Kenya and East Africa Super Hit.

Sauti Sol celebrated the wins with their social media followers as follows:

Yaay, we’re starting the new week with some great news! We won two awards this past weekend at the annual 5th Prestigious HiPipo music awards in Uganda; Song of the Year: Kenya and East Africa Super Hit for #UncondionallyBae w/ @officialalikiba . We’re grateful to the HiPipo fraternity for the wonderful nominations and lastly our loyal fans across EA for voting. We couldn’t have done it without you. #HMA2017 ???

Coming in third was Bebe Cool, who scooped Music Icon of the Decade, Best Male Artist and Song of the Year.

The HiPipo Music Awards is an annual extravaganza organised by HiPipo, to celebrate, promote and recognize music excellence in Uganda and East Africa.

Distraught Boyfriend Explains Why He’s Jealous of Sauti Sol’s Bien < Previous
Timmy TDat’s Lover Pissed Off by Rumors that He is Dating Songbird Vivian (AUDIO) Next >
Recommended stories you may like: