Henrie first made her mark on the local music scene with her sultry vocals which won her a Kora award in 2002 alongside the established Eric Wainaina.

In 2003, she won two Kisima awards for Best Female Artiste and Best Contemporary Gospel Artiste. She was also nominated for a Kora Award again in 2003.

After releasing her first album Simama that featured collaborations with industry heavyweights such as Rufftone and RK, she disappeared from the scene to reflect.

In a past interview, she said she took a step back after she felt that the gospel music was too commercialized.

“I wanted to take some time just to reflect, soul search and focus on God. I felt that there was too much going on in the gospel industry,” she said.

“When I first got into music I just wanted to make music to guide people during praise and worship. However, with time I felt that gospel was turning into a showbiz industry and having done my job I had to step back,” she added.

Well, it appears she is done reflecting following the release of her new album titled, ‘Tena’, which she says is a continuation of her first album.

“I am very excited about this new album, although it is a continuation of my first album Simama. The new album also makes me nervous because I have tried new things that I do not know how my fans will react to,” said Henrie Mutuku as quoted by Nairobi News.

Ther album contains 15 tracks and was executively produced by Henrie herself. 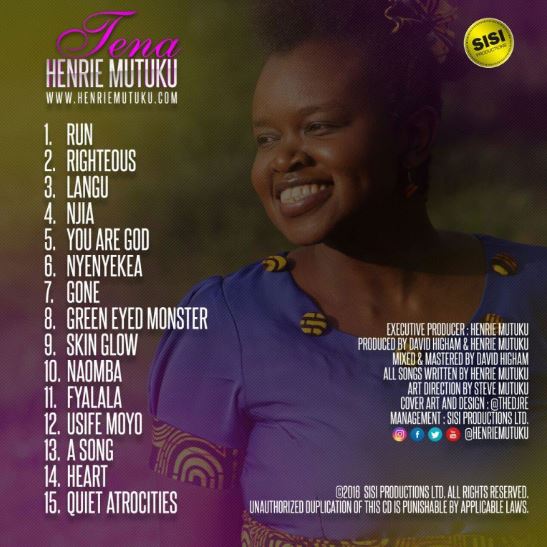 Watch ‘naomba’ below, one of the songs off the album.