Watch: Funny VIDEO Shows Who is the Better ‘Preacher’ Between Uhuru and Raila 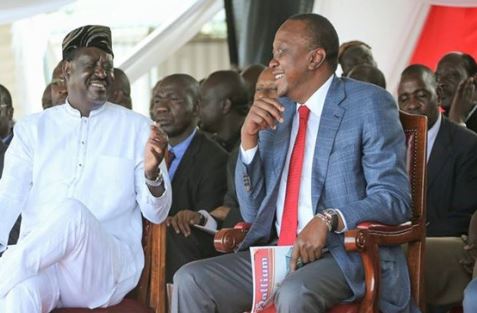 Ahead of the August General Elections, adversary politics pitting President Uhuru Kenyatta against Raila Odinga are in high gear.

The two leaders are traversing the country and in the process, there has been an exchange of words especially on matters IEBC and registration of voters.

As a result, their political differences are a juicy source for hilarious internet memes by the ever creative Kenyans on social media.

One such internet meme is cracking netizens showing who the better preacher is between the two.

Recently, Uhuru Kenyatta while in a tour of Nyeri was asked by residents to pray. He obliged and said a short prayer asking God for rainfall and moments later there was a heavy downpour.

Last year, Raila Odinga while in Malindi was preaching about Jesus’ temptations and we know how that ended.

This video shows the stark contrast between the two ‘preachers.’

Hilarious Meme Compilation (Thursday January 26) < Previous
After Uhuru, DP Ruto Features in ‘Thitima’ Anthem and Messes Up Midway (VIDEO) Next >
Recommended stories you may like: