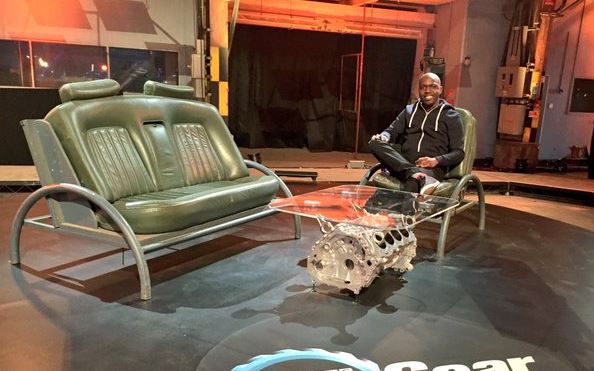 Kenya’s favourite globe trotter Larry Madowo happened to be in the UK this week.
Somehow, he managed to get an all access ticket to Top Gear’s studio, and he tells us that he interviewed the new presenters.
Top Gear, for those with no idea, is this huge motoring show that has been airing since 2002. Jeremy Clarkson was its star host for all those years before having a very public and unfortunate departure last year.
Instead of doing away with the show, the BBC decided to bring new presenters on board and these are the ones Larry was interviewing.
In Top Gear, there is this character called ‘The Stig’. His job is primarily to set lap times for cars tested on the show. He also instructs celebrity guests, off camera.
Basically, The Stig is all dressed up with proper racing gear, and his identity is never revealed. A lot of names have been thrown around, but the show never confirms or denies. At one point The Stig was jokingly exposed as F1 driver Michael Schumacher.
When Larry Madowo visited Top Gear’s studio and track, he took a few videos for his Snapchat. Somehow, UK’s biggest news website Mail Online tracked them down, stitched them and decided they had determined The Stig’s identity.

While Daily Mail based the exposé on Larry Madowo’s videos, they did not give him enough credit, and The Trend’s Host was not exactly amused.

@LarryMadowo why is it that they didn't acknowledge you as the source? Only the last two videos have your name tag

Aren't you expecting a bit too much from the Daily Mail? https://t.co/Z9SaIJTQ0e

Top Gear returns to BBC Two on May 29

The Hottest Stories on the Internet Today (Friday May 27) < Previous
Ghafla Has NOT Been Bought Out Next >
Recommended stories you may like: