200 Years Imprisonment! The Court Ruling Kisii Father Got For Killing His 4 Children

A Kisii father has been slapped with 200 years imprisonment ruling after he shockingly pleaded guilty to having killed four of his own sired kids. Exactly four years ago, the nation was shocked beyond words when Kenyans woke up to the sad news of a father who had ‘butchered’ his four kids in Kisii County.
Giving her sad account, the wife to the accused said that Misati came home at the wee hours of the night and started demanding that they relocate out of the house they were in by then. On objecting the proposal, an irritate Misati then picked a knife stabbed her in the forehead before she fled for safety, leaving her kids in to face the wrath of her angry dad.
Lucas Musati aged 40, admitted that he stabbed his wife (who fled) before going ahead to kill his four kids and dump their bodies in a nearby bush following a disagreement that had been sparked off by a family feud. Listening to the case, Kisii resident magistrate, Joseph Karanja, made a ruling that Misati will have to serve 50 years for each of the dead children a total of years that sums to 200.
Misati now has fourteen days to make an appeal and have the ruling lifted on him. Below is a picture of him. 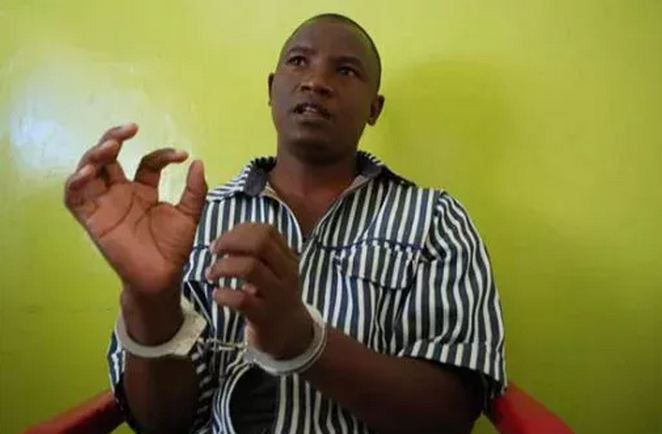 PHOTOS – Sauti Sol Partners With EABL for ‘Live and Die in Afrika’ Nationwide Tour < Previous
VIDEO – Maendeleo ya Wanaume Chairman with a Solution to Curb Penis Chopping in Kenya Next >
Recommended stories you may like: