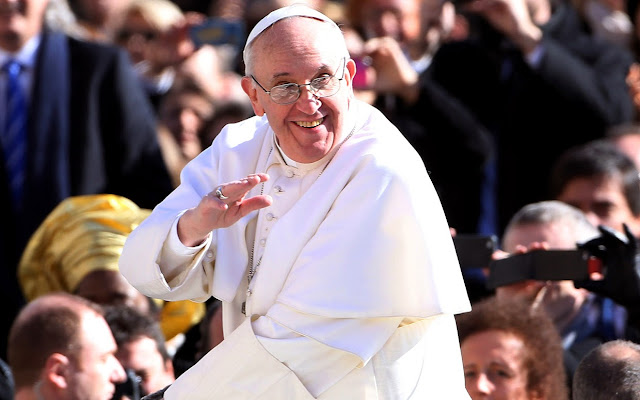 Like many people, Pope Francis took on some odd jobs as a student in order to make ends meet. In addition to sweeping floors and working in a chemistry lab, the pontiff’s resume also includes a gig as a nightclub bouncer.
While visiting San Cirillo Alessandrino church in Rome, Francis chatted with parishioners before and after Mass. During those conversations, he shared information about some of his former jobs, the Catholic News Service reports.
During his visit on Sunday, Francis went into detail about his former job when a parishioner asked that he pray for a relative who was looking to become a Franciscan Friar. He offered to pray that he have “the perseverance to go forward, but also the courage to turn back if he understands that this is not the right path.”
His gig as a bouncer was originally reported in March by the Italian paper,Gazzetta del Sud, which stated that he worked in a bar in Buenos Aires while he was a student.
In addition to talking about his job as a bouncer, he mentioned that his work later in life, teaching literature and psychology, taught him how to get people back into the church.
Pope Francis also responded to questions about his first Mass as pope, admitting to a bit of stage fright.
“Was I anxious? A little, yes, but everyone was nice. But it’s true, having a lot of people in front of you is a bit scary,” he said of his first Mass as pope. “[But now,] thank God, I feel really good. The Lord helped me be a priest, to be a bishop and now to be the pope.”
Eric Omondi’s ‘Gayish’ Stunt on Churchill Show Disgusts Kenyans < Previous
PHOTOS – Miss Tourism Kenya Contestants Visit UN HQ in Gigiri Next >
Recommended stories you may like:
OMG: KenGen Blames Monkey for Yesterday’s Nationwide Power Blackout
Wajir Town Orders All Donkeys To Wear Diapers
There’s a Tomato Emergency in Nigeria.. Prices Rise from Sh120 to Sh4000 in 3 Months After ‘Unkillable’ Moth Destroyed 80% of the Crop
DRC Minister Fired After He Was Caught Masturbating in Office