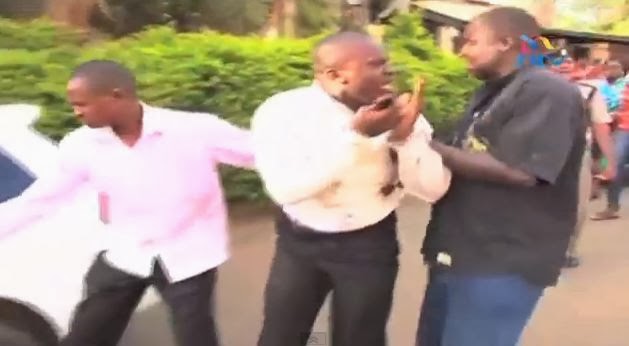 Yesterday, a male Kisumu based pastor was arrested for sexual harassment, against another man. Eric Osewe, a pastor at Maranatha church located at Manyatta estate in Kisumu, had allegedly been sending romantic messages to a man by the name Walter.
Having had enough, Walter filed a sexual harassment complaint with the police, and a trap was set for the man of God.
The two were to meet in a hotel room.

Unaware, the pastor booked the hotel room, hoping to have some private time with Walter. Police however crushed the party, and the man of God was arrested.
He was later arraigned in court and charged with indecent assault to a male person.


Of course Kenyans on Twitter had something to say.

The gay kisumu pastor was like “All the men present here today praise the Rod?” – @Masaku_

That gay pastor in Kisumu supports his male believers… he is 100% behind them.” – @madkisii

Study Confirms That Men Love Looking at Women’s Boobs < Previous
PHOTOS From The Umoja Train Crash This Morning Next >
Recommended stories you may like: