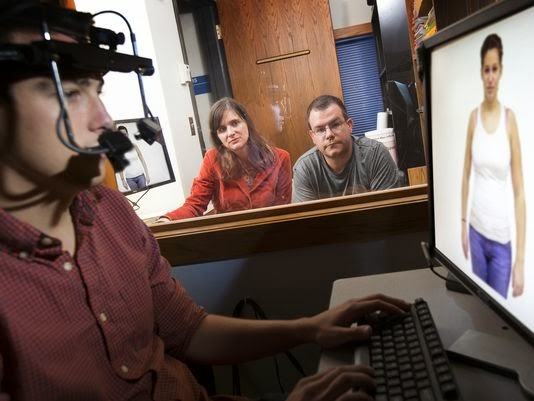 The eyes don’t lie: Men really do look at women’s bodies more than their faces, according to a new study that used eye-tracking technology to prove what many women have long observed.
But it’s not just men who do it — the study found that women look at other women’s bodies, too.
“We live in a culture in which we constantly see women objectified in interactions on television and in the media. When you turn your own lens on everyday, ordinary women, we focus on those parts, too,” says lead author and social psychologist Sarah Gervais of the University of Nebraska-Lincoln.
“Until now, we didn’t have evidence people were actually doing that to women’s bodies,” she says. “We have women’s self-reports, but this is some of the first work to document that people actually engage in this.”
The participants – 29 women and 36 men – were outfitted with the eye-tracking system, which measures in milliseconds how long the eyes are fixed on certain spots. Their gazes reacted to photographs of the same 10 women, each with three different digitally manipulated body shapes – curvaceous, much less curvaceous and in-between. (Only women’s bodies were viewed by study participants.) Both sexes fixed their gaze more on women’s chests and waists and less on faces. Those bodies with larger breasts, narrower waists and bigger hips often prompted longer looks.
The explanation may be partly evolutionary, Gervais says, since men may be drawn to more shapely women for childbearing — while women may be checking out their competition, she suggests.
And the study, published today in the journal Sex Roles, also finds that even when men are told to focus more on evaluating a woman’s expressions and personality, women with more curves get more positive personality ratings.
Researcher Kun Guo, who also uses eye tracking in his studies at the University of Lincoln in the United Kingdom, says the technology provides “more objective measurements” than do questionnaires, which are subjective.
“The beauty of eye movements is that it is more difficult to inhibit,” he says.
Jamie Lynn Goldenberg, an associate professor of psychology at the University of South Florida in Tampa, says there’s been a lot of research on self-objectification, but only recently has attention turned to perceptions by others. She hasn’t used eye-tracking in her studies but says it’s “an interesting way” to look at objectification, which amounts to viewing women as objects.
“We have new methodologies for studying these things — getting into the eyes of the perceiver,” she says. “It doesn’t explain why they’re looking, but they’re looking longer.”
– USA Today
The Jonas Brothers Officially Break Up < Previous
PHOTOS of Manchester City Midfielder Yaya Toure in Nairobi Next >
Recommended stories you may like: