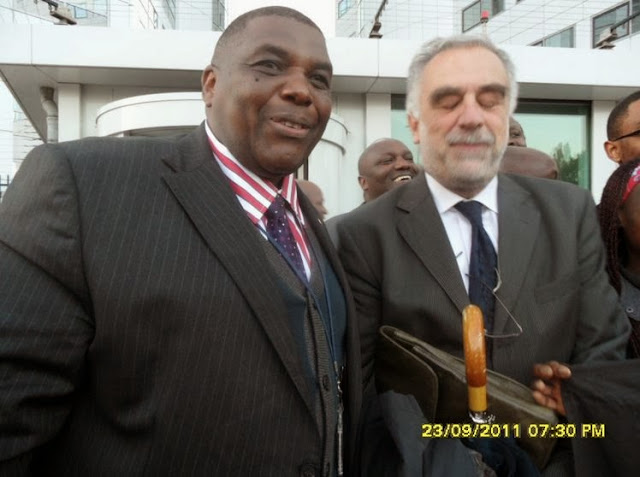 Matsanga is very vocal in matters Anti-ICC. He believes President Uhuru should not make an appearance at the Hague based court, because the evidence against him is fake. He says witnesses were coached and paid by the prosecution.

His opinion on the ICC is not exactly unique, but the way he delivers his views separates him from everyone else.
Matsanga has been likened to Miguna Miguna and Francis Atwoli, and rightfully so.

Here is his interview on Jeff Koinange Live.

If you think the JKL interview was loud, then you’ll have to watch the NTV one.. This time he went head to head with Makau Mutua. (Watch it at the end of the article)

Here are some hilarious reactions from Kenyans.

Matsanga is just a “Yesssss” away from becoming Atwoli. – ‏@Gishuvski

This Matsanga guy is scary as hell…Now we know who has been scaring witness our of the Icc Cases.. –  ‏@Hosea_Ouma

So, i’m watching Citizen TV but i can hear Dr. Matsanga shouting at the NTV studio, SMH! – @OleTiwaine

It’s all fun and games till Uhuru issues a title deed to Matsanga. – @mainadan

Matsanga has not eaten and he is that loud..what about when he is full..his voice breaks the glasses or!” – @kanda_kis

irony is matsanga saying do not bring emotions – @Kiri22

Dr. Matsanga was a professional mourner in another lifetime… –  ‏@MisterAlbieif I were the one paying Matsanga, I’d require that he uses more brain than he is doing. – @ochyengDr. Matsanga wrote his thesis all in CAPS…” – @laquishia254Matsanga is now interviewing madowo. LMAO. – @masaku_Matsanga looks like he can start beating people up in the studio! – @Hamza_65

Does this #matsanga guy understand that he doesnt av to be this loud to be heard?  – @ElkanaKimeli

I just switched off my TV but I can still hear Matsanga’s echo. – @MikeObare

I spent time with Dr. Matsanga in September… You can’t beat him in an argument. – @CaroleKimutai

And here is Matsanga on NTV.

Telegraph Reports That President Uhuru’s ICC Case To Be Suspended Following Intervention By UN Security Council < Previous
9 Things You Should Never Tell Your Spouse Next >
Recommended stories you may like: