After 67 Years, Land Rover Defender To Stop Production In 2015 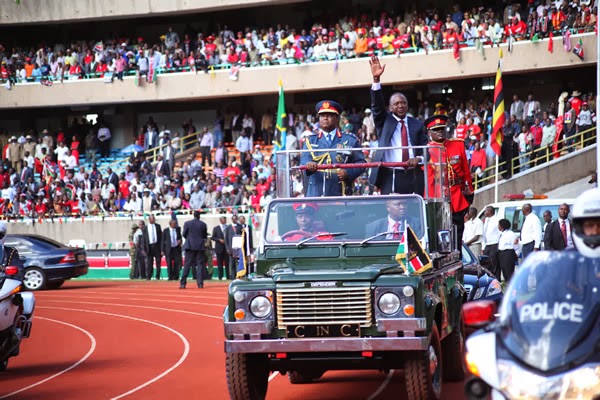 It’s the vehicle that can be patched up “with string” and carry you through deep waters, across Europe and into the Sahara Desert – at least, according to its owners.
So there was heartache in the hills and despairing in the dales as Jaguar Land Rover announced it will cease production of its Defender model in 2015 because it will not meet new European laws on fuel emissions.
The last Land Rover Defender will roll off the production line in Solihull in December 2015, bringing to an end a 67-year history of different versions of the model.
“It’s a mistake,” said Land Rover Defender owner Viv Wing, from Grantham in Lincolnshire. “What are they going to make instead? Something with nice seats and too much carpet, probably.”
While the luxuries of sleek, modern makes may be what many motor enthusiasts aspire to, it is the all-weather hardiness of the Defender that is part of the charm for its devoted worldwide following.
“It’s a brilliant bit of kit,” said Mrs Wing, the secretary of the Leicestershire and Rutland Land Rover Club. “Some people would prefer a Ferrari, but each to his own.”
For Mrs Wing, who has mobility issues following a riding accident, the Defender is a lifeline, taking her out into terrain she otherwise would not be able to access.
“I love the countryside and the Defender enables me to get out and see the views,” she said. “We went up Stanage Edge in the Peak District in ours the other week.”
In October 2012, Mrs Wing and her husband Mick joined up with 10 other owners on a 3,000-mile round trip through Europe to the Sahara Desert.
“One guy’s engine flooded, so he stood and fixed it by the side of the road in the desert,” she said. “You can do that with a Land Rover.”
The ease of repair – at least for the pre-1998 models which were constructed with minimal electronics – is another appeal for owners.
“They’re like a big Meccano set really,” said Richard Smith, 48, from Redditch, chairman of the Midland Rover Owners Club – the oldest in the country. “They are infinitely recyclable.”
He uses his six Land Rovers – the oldest, a Series 2, dating from 1959, to take part in trialling and rallies.
“I’ve heard of people driving them round patched up with gaffer tape. I knew a guy who drove back from Wales with a piece of string tied round his throttle cable when his throttle broke.”
The Defender is probably best known for its all-weather roadworthiness. While some cars shrink from extreme conditions, the Defender was built to tackle them head-on.
Mr Smith said his members work with NHS on-call medical staff during floods and snowfall to transport nurses to critically ill patients.
“It’s quite fulfilling to be able to help them do that,” he said. “Not many people know we are involved in that work.”
Often the love of Land Rovers is passed down the generations. Simone Birch, from Leicester, claims the vehicles are “in her blood”.
Both Mrs Birch’s two grown-up sons own Land Rovers and her three-year-old grandson can now name all the different models.
“They have a cult following,” she said. “When you pass another one on the road, the driver waves at you.”
So what will the demise of the Defender mean for devotees?
“We’ll still be able to get the parts – there are plenty of third-party suppliers,” said John Kesterton, from Solihull, secretary of the Midland branch.
“And while we don’t know what the replacement vehicle is going to be, hopefully it will maintain the Defender’s off-road capabilities.”
So does he plan to trade in his 1998 Defender CSW, with 175,000 miles on the clock?
“Not any time soon,” he said.
– BBC
Ciku Muiruri Attacks Sonko For Leaking PHOTOS of His Tiny Weenie < Previous
Malkiat Singh Makes Sh83 Million As Longhorn Publishers Buy His Books Next >
Recommended stories you may like: