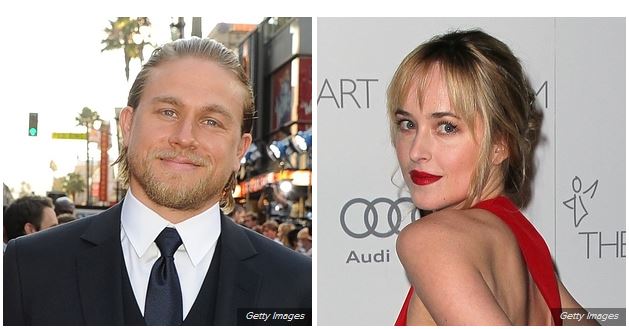 Dakota Johnson is about to become very, very famous.
Universal announced today that the young actress will play shy college student Anastasia Steele in the film adaptation of EL James’ fan fiction-turned-international best-selling erotic fiction series, Fifty Shades of Grey.
James then announced the Sons of Anarchy and Pacific Rim star Charlie Hunnam will play Christian Grey, the young billionaire/S&M enthusiast.
The movie, to be directed by Sam Taylor-Johnson, is produced by Dana Brunetti and Michael De Luca, who also produced The Social Network, which was one of Johnson’s first big screen credits. Career-wise, Johnson is probably best known for starring as the neurotic single mother in Fox’s short-lived sitcom Ben and Kate, which lasted only half a season in 2012. She also appeared in the 21 Jump Streetmovie reboot, as well as the series finale of The Office; she was Kevin’s replacement.
Johnson, who is a month shy of 24, should be well-equipped to handle the onslaught of attention that this new role should bring; she grew up near the spotlight, as the daughter of Melanie Griffith and Don Johnson. Her first role came in 1999, in her mother’s Crazy in Alabama, though she didn’t act again until 2010’s The Social Network.
Hunnam, 32, broke out in a run on Queer as Folk, participating in sex scenes that surely left him well-prepared for the sort of freaky bondage that is Christian Grey’s hallmark. He then transitioned to comedy, as Jay Baruchel’s dreamy British roommate in the short-lived Apatow college sitcom Undeclared.
His run as the focal point of the motorcycle gang drama Sons of Anarchy has made him a marketable star, landing him the lead role of Guillermo Del Toro’s Pacific Rim; the movie flailed in America but has proved a hit overseas. He’ll re-team with Del Toro for Crimson Peak, which is in pre-production.
-Buzzfeed