By Ken   /   Monday, 02 Sep 2013 05:40AM   /   Leave a Comment
It’s common knowledge that the media, world over, has been waiting for the ‘final news’ on Mandela. Some reporters have been camping outside his hospital waiting for that moment.
Some time back it was even reported that a certain newspaper had installed CCTV cameras near Mandela’s house to monitor the the ‘movements’.

So, you can imagine their disappointment when Mandela was discharged from hospital yesterday.

Today, Nation cartoonist, Igah, has this very funny cartoon on what runs in a reporters mind as he delivers flowers to Mandela. 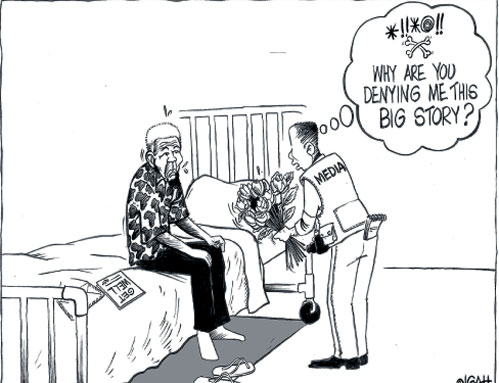 UPDATE: In an earlier version, we had indicated that the cartoon was Gado’s, but it’s in fact Igah’s.
Apologies for the mix up.

VIDEO – Here is That Teacher Wanjiku’s Airtel Advert You May Not Have Seen < Previous
Microsoft To Buy Nokia’s Phone Business For $7.2 Billion Next >
Recommended stories you may like: