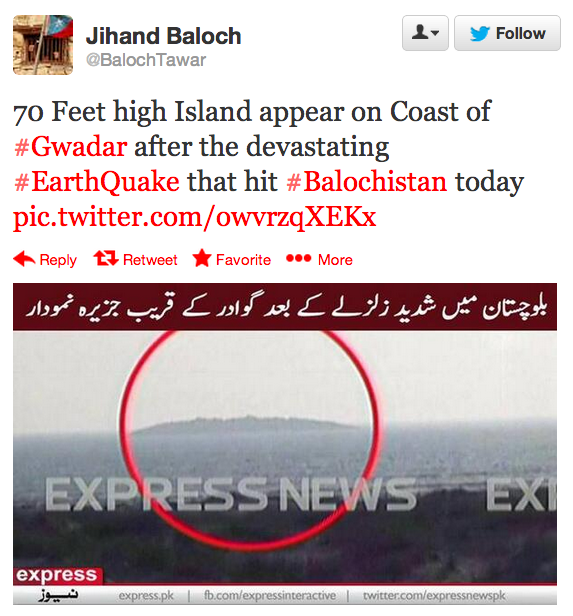 QUETTA, Pakistan (Reuters) – A major earthquake hit a remote part of western Pakistan on Tuesday, killing at least 45 people and prompting a new island to rise from the sea just off the country’s southern coast.

Tremors were felt as far away as the Indian capital of New Delhi, hundreds of miles (kilometers) to the east, where buildings shook, as well as the sprawling port city of Karachi in Pakistan.

The earthquake was so powerful that it caused the seabed to rise and create a small, mountain-like island about 600 meters (yards) off Pakistan’s Gwadar coastline in the Arabian Sea.

Television channels showed images of a stretch of rocky terrain rising above the sea level, with a crowd of bewildered people gathering on the shore to witness the rare phenomenon.

Officials said scores of mud houses were destroyed by aftershocks in the thinly populated mountainous area near the quake epicenter in Baluchistan, a huge barren province of deserts and rugged mountains.

Abdul Qadoos, deputy speaker of the Baluchistan assembly, told Reuters that at least 30 percent of houses in the impoverished Awaran district had caved in.

The local deputy commissioner in Awaran, Abdul Rasheed Gogazai, and the spokesman of Pakistan’s Frontier Corps involved in the rescue effort said at least 45 people had been killed.

In the regional capital of Quetta, officials said some areas appeared to be badly damaged but it was hard to assess the impact quickly because the locations were so remote.

Chief secretary Babar Yaqoob said earlier that 25 people had been injured and that the death toll was expected to increase as many people appeared to be trapped inside their collapsed homes.

Local television reported that helicopters carrying relief supplies had been dispatched to the affected area. The army said it had deployed 200 troops to help deal with the disaster.
Follow @nairobiwire