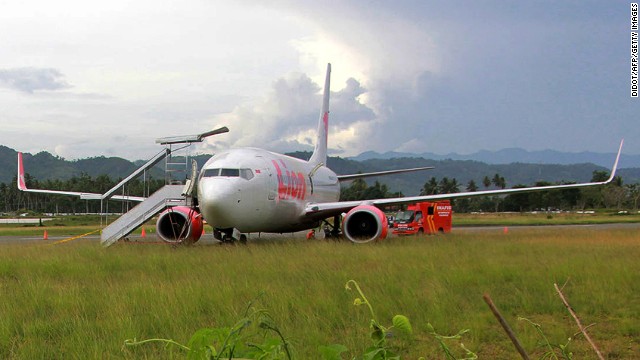 JAKARTA — An Indonesian passenger jet crashed into a cow and skidded off the runway as it came into land at an airport in the centre of the archipelago, officials said Wednesday.
No one was killed or seriously injured when the Lion Air plane carrying 110 passengers collided with one of three cows wandering on the runway as it arrived late Tuesday in Gorontalo, on Sulawesi island.

The cow, however, was crushed to death under one of the Boeing 737-900’s middle wheels, head of Jalaluddin airport Agus Pramuka told AFP.
The pilot, Iwan Permadi, told state-run Antara news agency he could smell “burning meat” as the jet ran over the animal.
He said he thought there were dogs in front of the plane as it came into land, “but it turned out there were three cows wandering in the middle of the runway”.
Pictures showed the dead cow under the aircraft’s wheel in a field. The plane, which suffered minor damage, had skidded into the field next to the runway, with its tail still on the runway.
All the passengers managed to disembark safely, transport ministry spokesman Bambang Ervan told AFP.

The plane had started its journey in Jakarta and also had a stopover in Makassar, on Sulawesi, according to local media.
The airport was closed following the incident, disrupting travel plans for people heading home for the Eid al-Fitr holiday in Muslim-majority Indonesia.
One small jet managed to take off Wednesday, but the Lion Air plane was still at the edge of the runway, Pramuka said.
Indonesia, which relies heavily on air transport to connect its more than 17,000 islands, has one of Asia’s worst aviation safety records.
In April, a Lion Air passenger jet carrying 108 people crashed into the sea after missing the runway as it came into land on the resort island of Bali. No one died but dozens were injured.
Lion Air could not be immediately reached for comment.