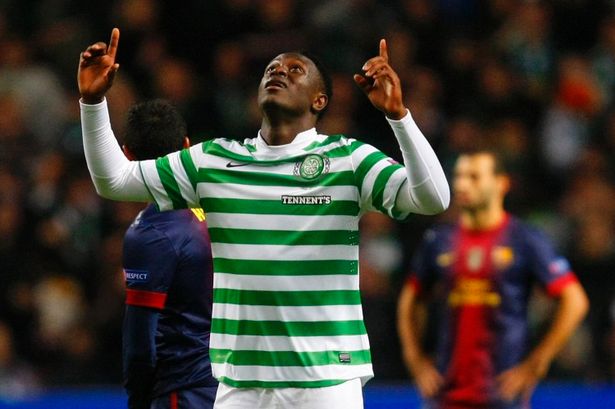 VICTOR WANYAMA is set to join Southampton over the next 48 hours in a £12.5million deal that smashes the Scottish transfer record.
Record Sport can reveal negotiations between Celtic and Saints have accelerated and the SPL champions have accepted the jaw-dropping bid.
Wanyama was due to play in Celtic’s 6-2 friendly defeat to German side Greuther Fruth last night but it’s understood he stayed at the team hotel in Berlin to help tie up his move to St Mary’s.
The deal blows away the previous transfer record of £11m that Spartak Moscow paid Celtic for Aiden McGeady in the summer of 2010.

Saints boss Mauricio Pochettino thought he’d landed the 22-year-old Kenyan for £12m but the club had to increase the offer after soaring interest from Cardiff City.
Parkhead powerbroker Peter Lawwell has all but concluded business with Saints chief Nicola Cortese and personal terms have been agreed with the player. All parties expect to be in a position to announce the deal by Friday at the latest.
Wanyama has told friends he expects to say his goodbyes to Neil Lennon and his team-mates later today at their German training camp. The Kenya skipper was bought for just £900,000 from Beerschot two years ago and his move is fantastic business for Celtic.

Kanye West’s ‘Swaghili’ Combines English and Swahili To Form a Brand New Language < Previous
Kethi Kilonzo, Duale, Alai, Audrey Mbugua, Sonko and others Engage in a Facebook Conversation – Hilarious Next >
Recommended stories you may like: