The Pain of a Little Girl… Must Read 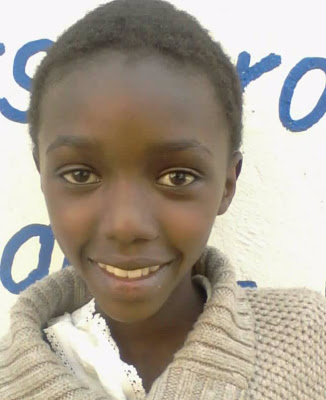 I first watched her story on Thursday Night on NTV. And it gripped me immediately. I watched,with deep sorrow,the story of this poor but bubbly girl. And after the news feature,I was so thankful that NTV was smart enough to provide an Account Number for Public Funds and also a phone number for MPESA. I immidiately wrote the number down,and 5 minutes later,I was calling that number. But,just as I had expected,the call couldnt go through. It was constantly saying “NUMBER BUSY” for the next 45 minutes. And I gave up calling,got sleepy and went to bed.

Following Morning,Friday 7th,I woke up and attempted calling that number again. Luckily,it went through. And I heard the voice of a mildly old man on the other side. His voice was faintly and weak. And he sounded totally humble and thakful that I had called. I told him that I am a social media writer who concentrates on social issues and real-life human issues and would love to meet him and his sick daughter,ELIZABETH NDUTA WAHOME.

And we agreed to meet on Saturday.(Yesterday) And so,Yesterday I got up early,called him up again,confirmed that I was coming and he told me that he was in Rongai Town. So,I rushed to town and took almost a whole hour to get to Rongai Town. I had never been to Röngai before. And man,Kumbe its a BIG town! I was shocked. Mzee Paul Wahome told me to stop at TUMAINI SUPERMAKET and I was lucky to find it just next to the road. I alighted,called Mzee Wahome and told him I was outside TUMAINI SUPERMARKET. And after 5 minutes,Mzee came. We met,shook hands and went off to THE PINNACLE SCHOOL to meet Elizabeth Nduta.

We got to THE PINNACLE SCHOOL in Rongai where we got a rousing welcome. I wanted to meet Nduta . And HUG her tightly. And after around 30 minutes,Nduta came. God,she was soo tiny. So small. I tried hugging her but she was so tiny. I held her tight,lowered myself to her short level and told her,”You are so beautiful. So sweet and so lovely”. She gave me a weak smile and said a sweet “thankyou” in a weak,faint voice.

I sat down with her. On a desk and started talking to her. Elizabeth Nduta Wahome is in class FIVE and is 12 Years old. Elizabeth is suffering from Kidney Failure. Both of her kidneys have refused to function. And she needs URGENT Kidney transplants. And her poor dad,Mr Wahome,has offered to provide one kidney.

Elizabeth,the only child of Paul Wahome and Agnes Wangari Wahome,spent 3 months at Kenyatta Hospital’s Ward 3B,undergoing treatment. She was admitted from March 27th to June 5th.

Her dad also told me that she cant urinate. And when she does,she urinates blood.

And she told me that she cant play like other kids and cant even write because her right hand has a painful tube insterted at the shoulder.

Kidneys clean Your blood by removing excess fluid,minerals and wastes. And when Your kidneys fail,harmful wastes biuld up in your body,It increases your blood pressure,it disrupts your heart rhythm,you lose weight,your bones are damaged and you experience trouble in sleeping,or working or breathng.

And BOTH of Elizabeth Nduta’s Kidneys have failed.

HER FAMILY NEEDS Ksh.700,000 urgently. For treatment,transplant and Drugs for 6 months.

Mr Wahome told me that since the story was shown on NTV two days ago,Kenyans have donated Ksh.50,000 so far.

We CAN DO MORE.

We can SEND MORE.

Please,Please. DO WHATEVER YOU CAN FOR Little Elizabeth Nduta.

And You can send MPESA to Mr Paul Wahome’s PERSONAL NUMBER:

The GREATEST favour You can do to Elizabeth,is by sharing this photo. SHARE WIDELY PLEASE.

Breaking: Mbusi Quits Ghetto Radio < Previous
OCCUPY PARLIAMENT RELOADED Going Down Today.. Here’s The Code of Conduct Next >
Recommended stories you may like: