When I dropped in the first call to request an interview with David, he was at the parking lot of Karen Country Club, just about to switch off his phone and head to the changing rooms. He politely asked me to call the following day so that we set a date for the interview.
I did call and we agreed on a date when I would meet this legendary Kenyan architect who had many firsts. He was AAK (Architectural Association of Kenya) Member Number 005, the other four were European. He was also the first African Chief Architect in the Ministry of Public Works, a position he held from 1967 to 1974.

A day before the scheduled interview, David dropped me a line, apologizing for having given me an appointment at the same time he had a prescheduled golf game. He asked that we push it to Saturday, early morning.

I later learnt that David is an ardent golfer, playing once every week at the Karen Country Club where he has been a member since 1978. He never misses his golf games and at some point I reasoned that it could have been easier to interview him over a game of golf. I would have thrown in that suggestion had he called me again to reschedule the interview. He didn’t. 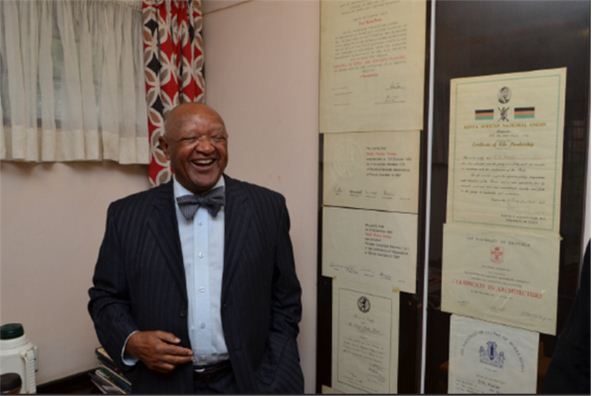 I drove to his office and arrived at 7.45am, 45 minutes before our scheduled interview. David called me in immediately he was informed I had arrived and was waiting. That was unexpected. David explained to me that he had purposely come to the office for the interview, and would be headed to Karen Country Club at 11am, for you guessed what. This man loves golf.

David welcomed me to a small, but tastefully finished meeting room in his private office, located in his building along Plums Lane, Parklands, Nairobi. One wall of the room had raw building stone finish; the three other partitions were of glass with film to obscure the view from outside. A large framed abstract painting on canvas hung from the stone wall. He sat on the side of the table, with the painting behind him as if to draw my attention to it.

We immediately got down to business. “Did you design KICC?” I asked. The building, which is synonymous with the image of Kenya, has had a mysterious history, starting from who actually worked on the designs to who its owners are. Fans of David say he is the brain behind that timeless structure while his critics say he was the face of government’s bureaucratic interventions in the project. David was Chief Architect at the Ministry of Public Works at the inception of the project. 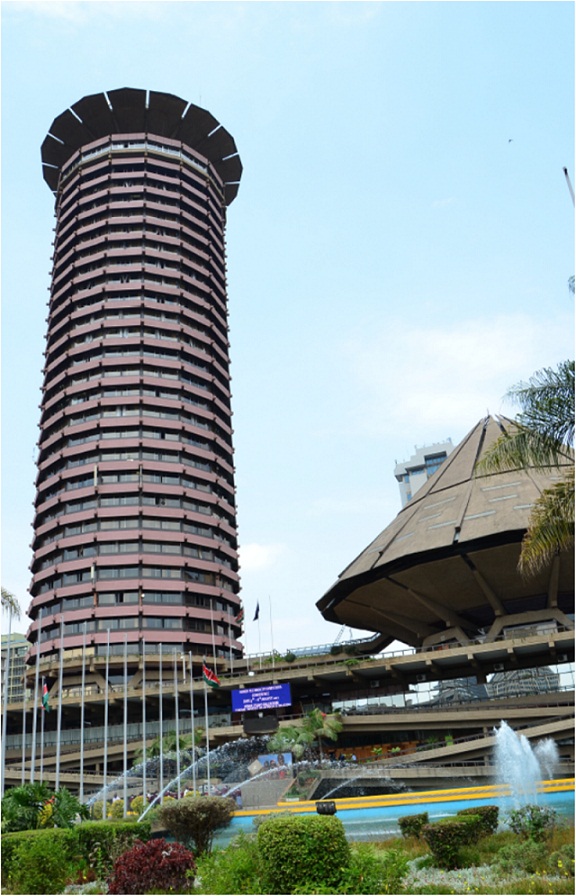 “Yes, I did!” He responded with authority, as if annoyed at my questioning of his involvement. “It was some time in 1968 when Tom Mboya, KANU Secretary General, called my office and asked for a meeting. During our meeting, he revealed that the party wanted a building that would be its headquarters that would have facilities for the governing council to meet.”
I asked him why the name Karl HenrikNostvik always comes up whenever one enquires who the architect for KICC was. David explains that Karl was his junior in government and assisted him in the project. He notes that while the project was ongoing, Karl’s contract with the government lapsed. He was thus appointed as a private consultant for the project.

David says he had developed the sketches and before he shared them with Tom Mboya,he happened to meet Kenya’s first president, Jomo Kenyatta, at State House on other matters where he mentioned the project to him.  Kenyatta developed interest in the project and instructed that they have weekly briefings on the project. He remembers meeting Kenyatta every Monday morning until the day he laid the foundation stone for the building.

David who was born on 10th July, 1932, went to several primary schools in Manyatta and Mwala before joining Alliance High School between 1949 and 1952.His interest in architecture developed by chance during one of his school holidays when he visited an uncle who worked as a cook for a white man.
His uncle was lighting up a fire using, what he later learnt was, building plan blueprints. On close scrutiny, he noticed that these were signed by ARCHITECT Imray Rosa. His uncle would later explain that his boss is an architect, and told David what he actually did.
David developed a keen interest in the profession and discussed it with his headmaster at Alliance, Carey Francis.
Carey tried to help him by introducing him to some white architects. This however did little to help as the same architects discouraged him by lamenting that he would have no clients to design for since all Africans lived in mud huts.

After his O Levels, and with the hurdles along his route into architecture, David did not pursue his dream of becoming an architect. He joined Makere University in 1953 for a Bachelor of Science degree in Mathematics, Biology, Chemistry and Physics.
His return coincided with openings at City Council of Nairobi for positions of draftsmen. David thought he should give his dream another attempt. He applied and joined as a learned draftsman. To hone his skills, he enrolled for evening classes at a technical college within town.
It was while he working at City Council of Nairobi that the colonial government advertised bursaries for students interested in studying abroad. This opportunity was only available to Makerere Alumni to which David belonged. On application, he was invited for an interview. Things looked positive for him since his former principal at Alliance was on the interviewing panel.

He was awarded a full scholarship which enabled him Join University of Sheffield in 1954. He graduated in 1959 and worked for some time before joining RIBA in 1960.
He served apprenticeships with J. Womersley, City Architect of the Sheffield Corporation (1959-1960), ProfessorQuaroni in Italy and Richard Hughes in Kenya (1961-1962).
When Kenya was about to get independence, David was offered to join the government as a planner. He heeded the call and joined the Planning department is 1964 after completing his post graduate studies in the UK.
David rose through the ranks, becoming the Superintendent Architect, second in command after the chief architect in the Ministry of Public works in 1965. When the Chief Architect retired in 1967, David took over.

David remembers several incidents which earned a great number of enemies within government circles. He had, on several occasions rejected attempts to bribe him, and plans were hatched to hound him out of office for ‘non compliance’.
It was in late 1973, when David was on an official trip to Canada and South America to learn from their experiences in social housing. His wife had accompanied him. On his return, government agents from the police and CID accused him of corruption, for taking his wife along on official government trips. David was upset by these moves and chose to quit the position after ten years of service to the government.

David joined BrazMenezes after he left government and formed MutisoMenezes International.  Together, they created a portfolio of projects impressive for its range and diversity as well as for the exceptional quality of his buildings and the sensitivity of the siting and landscaping.
The United Nations accommodation of 1975, comprising the headquarters of the UN Centre for Human Settlements as well as the regional offices of UNESCO and UNICEF, sited on 40 ha of undulating landscape at Gigiri, is remarkable for its interplay of structure and non-structural enclosure planes.

With the Kenya Technical Teachers College (1978), also in Gigiri, he achieved another level of clarity with contrasting planes of colour: vertical white walls for accent, delineating volumes, and horizontal planes of monopitch, dark red concrete roof tiles, defining various levels of spatial volumes that peak into a flat-topped pyramid over the amphitheatre.
David was also involved in the master planning and designing of the five phases of Bururburu where 5,000 houses were built to be mortgaged to ‘middle income’ Kenyans.
“Why has Buruburu transformed to the current state? Was it a flaw in urban planning and design?” I asked. David explains that the problem was of policy formulation and implementation by the authorities. “The government did not provide housing for the high income group as it did for the middle income group. The rich therefore took over the houses. Additionally, civil servants were not allowed to run businesses and thus we could not foresee a situation where home owners would pierce their back yards walls to create kiosks. And the authorities have not been steadfast at enforcing planning guidelines. All these factors played a role in the transformation of Burburu.”
Besides his work, David has chaired the Board of Registration for Architects and Quantity Surveyors (BORAQS) and Architectural Association of Kenya (AAK) which he was a founder member.

He has served in the East African Institute of Architects (EAIA) and Commonwealth Association of Architects (CAA). He has been an examiner in several schools of architecture in India, Australia and Zambia.
He has shown interest in politics but is yet to offer himself for election. He was a member of NARC election board.

15 Supersize Photos of Groove Awards Red Carpet < Previous
Kenyan Prostitutes Busted on TV In Saudi Arabia – To Be Charged With Possesion of Alcohol and Prostitution Next >
Recommended stories you may like: