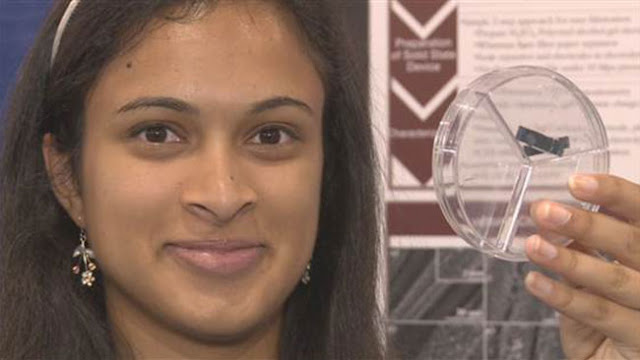 Now here’s the invention that we’ve all been waiting for: A device that instantly charges our cell phones.
A gadget like this might soon be on its way thanks to a bright 18-year-old from Saratoga, Calif., who was recently honored at an international science fair.

Eesha Khare is the mind behind a super-powerful and tiny gizmo that packs more energy into a small space, delivers a charge more quickly, and holds that charge longer than the typical battery. Khare showed off her so-called super-capacitor last week at the Intel International Science and Engineering Fair in Phoenix, Ariz. In her demonstration, she showed it powering a light-emitting diode, or LED light, but the itty-bitty device could fit inside cell phone batteries, delivering a full charge in 20-30 seconds. It takes several hours for the average cell phone to fully charge.
Khare also pointed out that the super-capacitor “can last for 10,000 charge cycles compared to batteries which are good for only 1,000 cycles.”

Khare’s invention is flexible and could be used in roll-up devices and might even have applications for car batteries.
The judges at the science fare were wowed by Khare’s brilliant invention and the senior at Lynbrook High School in San Jose received the Intel Foundation Young Scientist Award and $50,000.
“With this money I will be able to pay for my college and also work on making scientific advancements,” Khare told a cheering audience after receiving the prize money.
I’m sure her parents are proud and thrilled!

Obama Avoids Kenya Again, As He Heads To Tanzania And South Africa Next Month < Previous
14 Photos of Nick Mutuma’s Music Video Launch At Skylux Next >
Recommended stories you may like:
How Tech Startup Olive is Shaking Things Up
You’re The Man of My Life, Nandy tells Rapper Bill Nass After Proposal
Study: Women Who Have Sex Daily Live Longer
NASA Discovers New Solar System with 7 Life-Sustaining Planets