Technicalities and Mathematics of Providing Laptops to Kids – Lessons From Rwanda 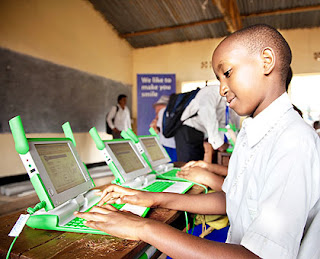 So Yesterday   I watched as the President iterated that the free laptop programme he promised is still on, to be precise this is what he had to say “6:09 pm Uhuru: My government will deliver on its promise of free laptops for our children starting next year. Our vision is to have laptops availed in future to be assembled locally”. Two things struck me …His time line(next year) and his ambition to have them locally assembled in future. But before I look into either one of his points let me first shed some light into one already existing laptops for primary schools  program.16th>

In Rwanda the supplier  was One Laptop Per Child (OLPC), an American charity linked to  MIT,but this process was plagued with controversy. I will only highlight the techie bits and stay clear of any politics here, the first controversy was when Intel opted out of the program,meaning this computers where to run on another chip-set  The second and the one I was very keen on was the Operating system the machines were running on,the war raged between Open source and Windows based XP. But despite this the computers were indeed supplied later on; the computer was  dubbed the XO laptop and saw Rwanda get 120,000 units,Ghana 10,000,Sierra Leone 5,000.

Now coming back to Kenya and looking back at what the president said.The first point was the timeline. The government should indeed not deploy this computers with any rush. I would suggest a whole year before they are made available to any classroom..reason? Well lets face it majority of teachers who will end up using this devices to administer learning to kids have limited computer training. I mean I would imagine the scenario if a teacher in say Nyeri or Siaya just got handed a bunch of devices and told to use in teaching, it would be no easy feat. Second the actual devices themselves….If we choose indeed to administer laptops what Operating system will they run on?
There are only two options here. Windows or and Open Source platform eg Linux. Visiting the OLPC the issue was between exclusive use of open source software for the project  and those in favor made suggestions supporting a move towards adding Windows XP which Microsoft was in the process of porting over to the XO hardware. Microsoft’s Windows XP, however, was not seen by some as a sustainable operating system. Microsoft announced on May 16, 2008, that they had let them have Windows XP for $3 per computer. It would be offered as an option on XO-1 laptops and possibly be able to dual boot alongside Linux. However, no significant deployments elected to purchase Windows licenses.

Assuming this laptops are to indeed run on Windows at $3 per windows licence and assume the first phase sees 500,000 issued. That would mean Microsoft would charge $1,500,000  (120,000,000 KSH).  And since the government aspires to buy  5.86 million computers for kids that would translate to approximately $17,600,000 (1.4 Billion KSH) Just for the OS.The other scenario would be to use a free variant of Linux…and do away with this cost.And assuming that the computers are not going to run on an Intel based chip-set (to reduce cost per unit) then for the performance to be optimal Linux would make more sense. Then going ahead and looking at his suggestion that the computers get manufactured locally it would mean we buy the parts from a cheap source eg. China ship them to Kenya assemble them on an alternate chip-set and a Linux Variant and hand them over to the kids.

But the west would fight this with all their might…..not because they are losing out $17,600,000 , that’s pocket change, but because of a simple mathematical term called extrapolation. If a kid grows up using Linux since class 1 what are the odds that when he/she turns 20 and wants to buy their own computer they will choose Microsoft? This will mean slowly by slowly Microsoft will fade out of Kenya as the OS of choice would be Linux. Asia is a living example of these, kids grew up using Linux and Microsoft is not as big there as it was back in the day.Intel would also loose a large market presence in the country. So if Uhuru were to opt for this then he would be in turn be giving the west a big middle finger.But there would be the issue of Internet connection on these laptops
The other option would be to provide a solar powered tablet instead of a laptop. A simple Android based Kenyan assembled tablet would cost around $30 and would represent the least-expensive solution for bringing computing and, more importantly, internet connectivity, to students in Kenya, tablets of this kind can access data networks using the GPRS  where 3G or 3.75 G is unavailable.With the App bubble at its peak devs would have a fun day driving local online and offline based content for these devises. Data providers e.g Safaricom, Zain,Orange ,YU would see data revenues go up also translating to more Revenue for KRA to take home and job creation.
Source: endingcampo blog