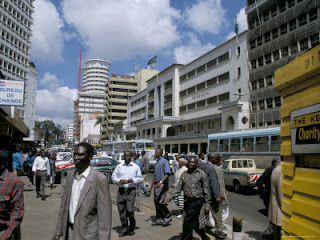 It was on Friday 15/06/12 around noon at Nakumatt Crossroads,on my way to KCB,Karen branch,when a smartly dressed middle aged man approached and greeted me after which he inquired whether I knew of a Doctor Muthembi. I told him that the name sounded familiar but had noidea where his office was. I offered to call someone who may know about him but he resisted and used his mobile and at that time I thought he was being given the direction to the Doctor’s office.  After he finished talking on his mobile, a lady who was also smartly dressed appeared from the opposite direction and seemed to be heading towards the  KCB Bank. The man summoned her too and asked if she knew of the Doctor’s office. She thought for a while and affirmed to be knowing him, she told the man that the Doctor was initially at NYUMBANI CHILDREN’S HOME in Karen but has moved to WESTLANDS, UNGA HOUSE. The man appreciated the assistance he got from us,and it was at this juncture that he introduced himself as PASTOR CHACHA of APOSTOLIC CHURCH IN KITALE.

He purported that they usually gave Dr. Muthembi financial assistance to help orphaned and sick children. He also told us that they were going to offer free medical services at KICC ON 7TH JULY 2012. He asked us to spread the information to friends. ”PASTOR CHACHA” also mentioned that he has been featured in JEFF KOINAGE’S interviews on K24 television. The ”PASTOR’S” introduction really excited the lady who attested to have seen him and listened to the interview on K24. She told the ”PASTOR” that she was MRS MWANGI and lives in KAREN and that she has heard much about him. She also said that she has been trying to find ways to reach him. She mentioned that during the TV interview ”PASTOR” CHACHA had spoken of his divine gift of healing. The man agreed to that and told the lady that she seemed to know more about him than I did. He asked the two of us to accompany him to his car to give us his business cards.Before the offer to go for the business cards, the man bragged to have the power to prophesy. He was quick to prophesy to the lady that he knew she had marital problems and that she was going to withdraw cash from the bank to take to her lawyer. The lady expressed shock and confirmed that it was true. It was at that point that it occured to me that the two were actually together and were playing a game on me and wanted to lure me into their car.

I immediately sensed danger pulled away from them and told them I was going to call police.  They started to walk away and within a few seconds a car BEIGE in colour, TOYOTA NZE Reg. KBM 64**T drove to where they were, they hurriedly got in and sped off. I raised alarm shouting ”WEZI WEZI” !. The public responded very fast and as they tried to drive away they drove towards the Karen Shopping Centre’s exit gate but their luck ended there as they found the gate already locked. Inside the car, were other two women all middle aged.They were apprehended by the public and beaten up mercilessly. However, the
police appeared in good time to rescue them. They were taken to the Police Station and whilst there, several people who had been kidnapped and conned by them came and identified them. I came to learn later at the Police Station that they were from THIKA.