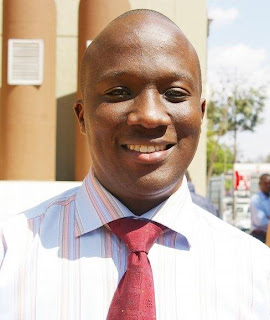 KTN’s national security reporter Dennis Onsarigo was on Friday night brutally attacked by a gang of strong men in Nairobi’s CBD.
The attack took place along Banda Street, a few blocks from I&M bank building, where KTN has offices. It was at around 11PM, when according to Onsarigo, a gang of between 7 and 10 men surrounded and assaulted him.
It’s not clear whether the journalist was a ‘premeditated target’, or just a random victim, but according to him, the attack had nothing to do with his job. This is what he tweeted.

Am fine but in pain. I was attacked by a group of seven-ten men on banda street at around 11pm. Nothing to do with work.

As soon as word went round that the good journalist had been assaulted, rumours started flying that the reporter had been beaten up after covering the KU riots. Onsarigo was probably denying that when he said the attack had nothing to do with his job. It is not clear whether anything was stolen from him though.

Questions will however have to asked, considering 11 PM is a reasonably early time, by Nairobi Friday night standards. The fact that it was done at a pretty ‘safe’ part of the city is also worrying. If that can happen in the CBD, what will happen in the ‘unsafe’ parts of the city?© nairobiwire.com

Uhuru Kenyatta Shows America the Middle Finger: Dumps His iPhone For Samsung Galaxy S3 < Previous
Mugabe To Attend Pope’s Inauguration Next >
Recommended stories you may like: