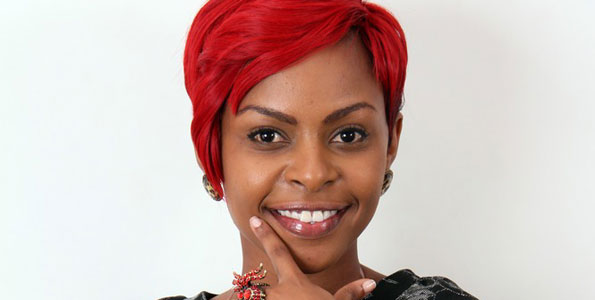 [Within a span of three years, Size 8, real name Linet Munyali, has risen from a struggling artiste level to one of the most sought after musician in the land. More so, all the political camps have offered her juicy amounts to perform in their campaigns, but have turned down the offers. Why? John Muchiri finds out.]

In just three years you have moved from near zero to being a millionaire, how did that happen?
Even I still don’t believe that. It’s God’s work and hard work put together.

How much are you worth right now?
I don’t know yet, and I have never calculated.

Okay, last year was your best. You had a Safaricom Live contract, you hosted Sakata dance show, had several TV commercials, acted in ‘Mheshimiwa’ TV series and your music was blazing the airwaves.
That was all planned by the way. I wanted to be the first Kenyan musician to be on TV the same time the most. You switch on your TV and find a ‘Bonyeza Ushinde’ advert I have done, then my music plays in a music show, then see me acting and host a show on different occasions, and it was lovely seeing that work very well.

I guess all that translated into cash. How much money did you make last year?
If I’m to calculate for six months only up to December, I made about Sh7 million.

What have you done with that kind of money?
Investments here and there, 10 percent as tithe, and I’m about to start a children’s home with a friend Eddy Gicheru Oketch, in Nyanza.

At what point did you start getting that kind of money?
When I made a decision to raise my performance fee. I used to charge very little cash to perform but when I realised how powerful I was as a musician, I decided to take advantage of that.

Who or what do you owe your success to?
Other than God, there is Clemmo of Calif records, who gave me a platform to record music when I was zero. I also work hard and appreciate everyone who supports me and my music, especially my family.

I thought you fell out with Calif and you excelled?
Yes, Calif management team, but not Clemmo to be specific. He is still a very good friend.

Sometimes you dress very skimpily while on stage, is your family okay with that?
Funny, my mother watches almost all my performances and videos on TV. She is my biggest critic. She doesn’t mind me wearing miniskirts or dresses, but when one looks bad, she always points it out.

It’s campaign season, why haven’t you endorsed any political party like many of your peers?
Because I want peace in this country. Politics and politicians come and go, but without peace, the common mwananchi will suffer and Kenyans have seen that happen before.

Politicians are already luring musicians with lucrative deals as long as they endorse and perform in their campaigns. Don’t you think you are losing out?
The same politicians from different camps have called me too. I have declined all their offers and it’s the choice I have made. I have given all presidential candidates one condition that I will appear in all their rallies if they promise to preach peace with me on stage.

What’s your opinion on those artistes who have already endorsed politicians and their parties?
I can’t judge them because every person has their own reason for doing what they do. But I would tell them one thing, while there, please preach peace.
We have seen international musicians like Jay-Z and Beyonce endorse a presidential candidate like Obama. What do you say about that?
America’s politics is more mature compared to Kenya’s. Here, we chose tribes not development.

Why are you so obsessed with this peace issue? And what is peace according to you?
To begin with, peace is like this fertile land for growth, one that can make the impossible be possible. I was affected during the 2007-2008 post poll violence when I lost friends and lived in fear every day. I don’t want to experience a repeat of that.

So what exactly are you doing about it?
I am working with like-minded people and organisations. I have been trying to voluntarily get to the grassroots and recruit several peace ambassadors across the country.

How does that work?
The peace ambassadors will preach peace within their communities and stop any form of violence or unrest that might mar the country especially during these sensitive election times.

Are you doing it on your own or there are people assisting you?
I am trying to mobilise several musicians and other showbiz stakeholders to join my initiative.