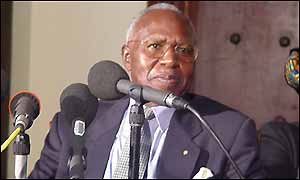 Former influential cabinet minister and Kisii community spokesman Simeon Nyachae has come out of his political retirement and endorsed Uhuru Kenyatta.
Nyachae’s decision was guided by what he termed ‘public demand’. He said that while being interviewed by a local radio station, the public kept asking him to declare his stand.
Nyachae made a grand entrance at Gusii Stadium inside a URP branded chopper.
“Today I come here and I don’t need to explain anything to you because you have eyes to see for yourselves,” he told the cheering crowd.
He also told the crowd not to agree to be divided, but to fully unite behind Uhuru Kenyatta for their chance to remain relevant after the elections. “Don’t be like fish to be fished any fisherman.” he said. He further added that the community has never relied on anybody for survival, but needed a government that would safeguard its businesses, land and job opportunities.

The retired politician opted to take a back seat in politics after his shock defeat by Robert Monda at the Nyaribari Chache parliamentary race in 2007.

Kisii region is one of those being termed as swing regions that may go either way. Both CORD and Jubilee have spent massive resources for this regions, and their votes according to opinion polls and political analysts will be shared almost equally.
As a sign of how disunited the community is, youth allied to Raila poured into the streets of Kisii town chanting pro-Raila slogans.
© nairobiwire.com