Samuel Kivuitu Feeling Better After Getting Cured From Cancer 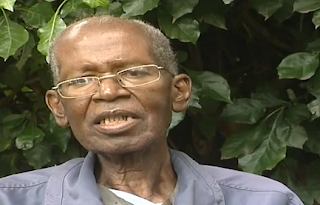 In an interview with KTN’s Joe Ageyo, former Electoral Commission of Kenya Chairman Samuel Kivuitu, spoke about the coming elections, pointing to a logistical headache for IEBC as they administer what is probably Kenya’s most complicated election so far.
He reiterated his belief that an election of such magnitude should not be held on a single day. He said that he had proposed that it be split into two, with the presidential vote being undertaken together with the county representative, and the MPs, Senators and Governors voted in together. The visibly frail Kivuitu took time to look back at events in 2007, where he said he was not to blame for anything. He claimed that as the chairman, he only announced what was brought to him, and saw a similar occurrence happening to Isaak Hassan.

Kivuitu has been fighting esophagus cancer for some time now, but announced that he was declared cured. He has however not regained his previous shape yet. We wish him all the best.

Muthoni Drummer Queen To Perform At AFCON Finals < Previous
A Former IDP’s Peace Message To Kenyans Next >
Recommended stories you may like: