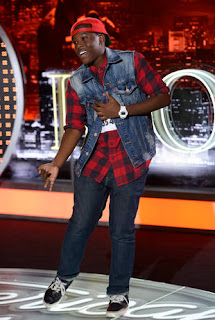 Remember the name Sanni M’Mairura, or probably Mwaura because he’s Kenyan. Actually his Father is Kenyan but his mom is Tanzanian. He is currently enjoying the lime light in America after he impressed American Idol judges during San Antonio’s auditions. Finally, someone who made Nicki Minaj and Mariah Carey agree on something.

Sanni announced his entrance on stage with lots of confidence and went on to speak a sentence in Swahili. The 16 year old then brought the house down with his own rendition of Michael Jackson’s Who’s Loving you. At the end of his few seconds, all the judges were very impressed. In fact all of them, namely: Nicki Minaj, Keith Urban, Mariah Carey and Randy Jackson gave a yes to the young boy. Nicki went on and on about Sanni’s marvelous performance, with her frenemy Mariah Carey agreeing totally.

Little is known about Sanni, apart from the fact that he holds lots of potential and now the platform. His voice has been compared to Justin Bieber’s by many, and that may explain why he has done several of his covers. He can also dance, and his other dream is to teach a dance class. His YouTube account is filled with covers of major artists, with a preference to Justin Bieber. Among them are Nothing like us, Be Alright, Next 2 You and Baby. He has also done Chris Brown’s With You.

Here is the video of his audition.

Kingwa Kamencu Endorses Karua After Pulling Out of Presidential Race For Failing To Get 2000 Signatures < Previous
List of Uhuru Kenyatta’s Land and Businesses Next >
Recommended stories you may like: