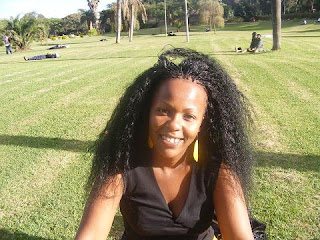 As the presidential candidates received their certificates from IEBC chairman last week, Kingwa Kamencu was conspicuously missing. The controversial Oxford University graduate had generated a lot of interest after declaring her candidacy. For several months however, she went silent as she was in the process of completing her studies. Mid last year, she returned and again she was all over the the media, though not to the magnitude of the main presidential candidates. Most of the stories about her were to say the least weird.
Her most famous was the Underwear Free Revolution.

Kamencu has come out to explain why she will not be on the ballot come March 4th. She claims that the reason she pulled out of the race was because she could not collect the required signatures to be cleared by IEBC. The constitution states that a presidential candidate must collect 2000 signatures from at least half of the 47 counties. This is what Kamencu was unable to do. She says that they were given the forms to undertake the exercise on January 21, which they were supposed to submit by January 24. Looking at her lean campaign team, she concluded it would be impossible to get the signatures on time, and chose not to turn up when other candidates got cleared by the IEBC.

Asked who of the remaining candidates she supports, Kamencu is quick to state Karua. She says that during her campaign, voters have skepticism on women candidates, and that was her main challenge. For that, she throws her weight behind the only female presidential candidate.
Looking back at her campaign, Kamencu regrets not getting enough coverage on the mainstream media. She attributes this to her lack of resources to move around the country everyday. She’s however quick to point out how her campaign utilized social media, by updating followers on her campaign tours.
To sum it all up, Kamencu says she was a presidential candidate till January 25th, when things fell apart, and for this she will get into history books.
© nairobiwire.com