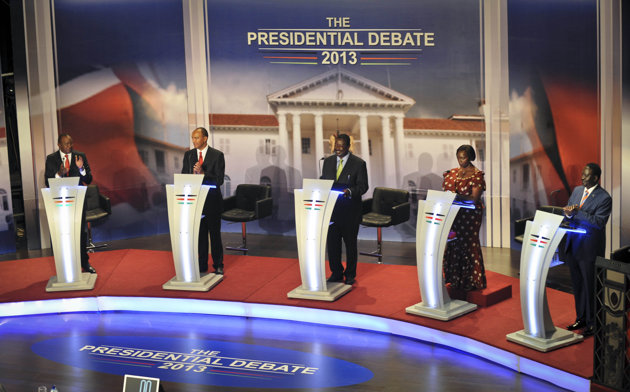 The Jubilee Coalition has written to the Presidential Debate Steering Committee, stating that Uhuru Kenyatta will not participate in the 2nd presidential debate slated for Monday next week.

In a letter dated 18th February, the coalition goes ahead to give reasons as to how they arrived at that decision. The party suggests that the moderators were less than neutral and were trying hard to showcase the negative side of Kenyatta. They cite the ICC issue, which Linus Kaikai introduced as the ‘elephant in the room’.
The letter further states that when Paul Muite tried to introduce another dimension in the matter, when he said that Raila could not have escaped blame if his deputy William Ruto was involved, the moderator failed to pursue that angle.
The party then wonders how scandals related to the prime minister such as Triton, Kazi kwa vijana and maize scandal were not introduced.

The coalition then takes issue with the lack of follow up questions on Martha Karua’s declaration of commitment to family values. This statement most probably refers to the Martha Karua – Father Wamugunda scandal.
They then take issue with the moderators failure to ask about Peter Kenneth’s alleged financial improprieties at KFF and Kenya-Re.
Muite is also not left out. The party wonders why he was not questioned about an alleged Sh 20 million bribe he received from Kamlesh Pattni during the Goldenberg era.
Ole Kiyiapi, the party believes, should have been questioned about the free primary education scandal.

After all that elaboration, the letter concludes by stating, “Uhuru Kenyatta will not participate in the second round of the Presidential Debate scheduled for Monday 25th February, 2013.”

Embedded below is the actual letter. (Desktop only)

Citizen TV Refuses To Host Kabando wa Kabando on Monday Special, For Calling Them CORD TV < Previous
Why Uhuru Kenyatta Withdrew From The 2nd Presidential Debate Next >
Recommended stories you may like: