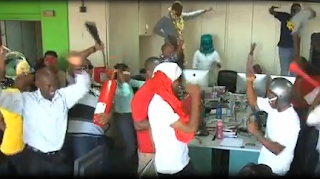 The Harlem Shake frenzy, is the baddest thing in the world right now, after dethroning Gangnam Style. Thousands of Harlem Shake videos have been made and uploaded on YouTube.

The original Harlem Shake was introduced in 1981, by a resident of Harlem in the US. It went viral in the neighborhood, but soon ‘died’. Then in 2001, G.Dep featured the dance on his music video “Let’s Get It”. Fast forward to 2013, and here we are again.

Basically, the video lasts about 30 seconds, and features an excerpt from the song “Harlem Shake” by electronic musician Baauer. One person (helmeted or masked) surrounded by other people not paying attention, dances to the song alone for about 15 seconds. The video then cuts to the entire crowd doing a crazy convulsive dance for another 15 seconds.

Capital FM staff are the latest to join the Harlem Shake madness. They’ve done it, and recorded themselves doing it and it’s surprisingly not that bad.

Tribalism.. What Tribalism. It Is Greed < Previous
Waititu And Sonko Booed After Taking Campaigns To ‘Esagasaga Night’ At Carnivore Next >
Recommended stories you may like: