Tribalism.. What Tribalism. It Is Greed 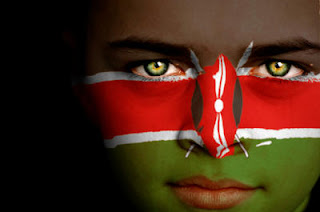 NOT TRIBALISM BUT GREED.
The reason why Kenyans fought in 2008 is not tribalism. it was uncontrolled greed for power, land, money, and greed to be attached to government resources through favoritism. And tribalism was evidently the best tool to accomplish these. Again the real issue is not tribalism, it is greed. Tribalism was used as the battle field to propel politicians to power. Kenyans are not tribal. The resent polls show Tribal difference is no concern to Kenyans. Deep down in the heart of Kenyans there is nothing like tribalism. The polls show that Kenyans are desperate for employment, especially young Kenyans. Tribalism is just a vehicle politicians use to disrupt unit and peace. The common Kenyan is so brainwashed nowadays that they actually believe all this violence was about tribalism; BUT was about the selfish interest and atrocious agendas of the greedy politicians, who manipulated their tribes with greed to fight another tribe. Tribal Lies and deceit will be a reserve for greedy politicians, who would use it to see that they ascend to power.


We Kenyans live with people from other tribes, peacefully. Other are our bosses other employees others are friends, our landlords and tenants, workmates, and classmates. We even marry from other tribes, and help each other regardless to the tribe one is. When differences appear between two of different tribes they settle their matters personally and peacefully without involving the whole tribe of the party. Our dislike for a person does not make us hate the whole tribe, no, Kenyans are not tribal. But the issue of tribalism comes only when there is an election, why? It is because tribalism is just a vehicle politicians use to disrupt peace, after we have fallen prey to their greed. If we deal with tribalism and forget greed then we would have dealt only with the stem. And the roots which is greed will continue to grow, sprouting to tribalism.

When a politician gives you money to vote for him/her, or gives you personal promises (tribal promises), he or she is appealing tour you greed. He wants greed to drive you to vote for him/her, or burn down properties and destroy others’ right to life when he/she does not win. And when we continue to let the politicians feed our greed instead of let greed die, then Kenya will be characterized with corruption, unemployment, insecurity and chaos. If we elect greedy politicians our nation, Kenya, will be found to be in a state of gradual political, moral, economic and social decay. Greed and corruption will typify the government coupled with unfair measures directed against citizens regardless of the tribe.

The issue of greed must be pined face-to-face to avoid the repeat of what happened in 2007/2008. Let us not sing about tribalism forgetting about Greed which is the root of tribal war in Kenya. We are not to allow politicians favors. I have heard people say “mwanasiasa akitupea kitu kidogo tutachukua, lakini hatutampigia kura. Hakuna mtu anaweza kukataa pesa, lakini kwa roho tunajua ninani tutachagua”. Don’t let these people entice you with your taxes, they know when you take their money you will change your opinion to, “heri ni pigie huyu kura, huyo mwingine hakuna kitu amenipatia na labda sitamuona tena baada ya miaka tano” greed and peace do not go together. Peace is a fruit of the Holy Spirit where else greed is a fruit of the devil. We are to put greed to death if we are to bear fruit of peace. No matter how much we talk about peace, without putting greed to death we will be doing something close to nothing.

I will counsel you don’t accept their moneys. They are a alluring to you greediness and once you change you motives from liberality to greed, then they can control you. When you choose someone solely for the reason of money, the money usually makes you greedy, immoral and can exploit you for skirmishes and violence. That is how money is powerful, especially to greedy citizens. The politicians know that, and when you accept their money they can control you because where you treasure is there will your heart be also. Matt 6:21 Luke 12:34.Even the bible puts it clear \”For the LOVE of money is the root of all evil\”.

A root is that which supplies to the whole plant. And when the overriding love of greed replaces the love of God, and the love of your neighbour from another tribe, you end up hurting all those who you are to love, even burning down churches, for 100 shillings given by a politician. Greed for kitu kidogo leads to no respect for others, their properties, or their rights. Losing your way from the right candidate to the wrong one because of voracity and covetousness, means piercing ourselves through with many sorrows as the bible puts it in.1Timothy 6:9-10. Avoid their cunning way and make sure you have voted out all the hungry candidates. Reject their money and they will not have control over you.

Mind you, even if the greedy politician is on the seat will not solve the problems you experience because you are from the same tribe. You will pay dearly, even more than a hundred times for your irrational acceptance of 100 shillings. A hundred Kenya shilling will not only pay for the ticket for the ravenous politician to the government to embezzle more funds. But will also cause disturbance if the politician loses the seat to a favorable opponent.
The value of our lives can not be compared to 100 shillings, so don’t let them appeal to your greed. Don’t accept their moneys, even the bible cautions us “Watch out! Be on your guard against all kinds of greed; a man’s life does not consist in the abundance of his possessions.” (Luke 12:15). So let us avoid greed at all cost.

We have seen how they like increasing their salaries without any concern to the suffering citizen who elected them to Government. And due to their association with insatiability, they will spend what they have earned in government in campaigns just to be in the government again, to get a hundred fold of what they has spent during the campaigns. And this greed will thrust him to do what it takes just to be in government, even though it means clashes using tribal lines. This is cruel; to appeal to the greed of desperate young Kenyans who are unemployed, to fight each other destroying houses and businesses, just to make him clinch the seat of power. But we permit them to control us through greed.

How have such evils like greed and corruption within our national leadership been able to shake our nation between tribal lines? Because, we have allowed them to entice us with greed. and hence divide us between tribal lines. We have to tackle the issue of greed personally. Each and every one of us is to face it head on. We are not to allow greed to take most of our minds. Politicians are really cunning, they know All it takes is uncontrolled greed, ambition, a total lack of morality of basic human dignity to manipulate votes toward him. Let the politicians sell their agendas and not fake promises based on tribe. They say “when you chose me I will make sure I have employed all the people from this tribe”. That is manipulation at best. Selling distorted policies that appeals to our greed instead of policies that extend to the country as a whole. To be employed on the basis of tribe instead of qualifications, is charming to our greed. Don’t allow such person to entice you because they and their direct family are the only ones who benefit from their promises. In fact we are not even to go to their rallies, and break any association with them completely the bible says to not associate with anyone who call himself our brother…and is immoral or greedy, … With such a man do not even eat.(1 Cor. 5:11). We should not come even near them as long as they are selling greedy agendas. Any agenda that seeks the interests of one tribe instead of the whole country is to be rejected by our votes. The problem with electing a greedy politician on the basis of his tribal promises is that he won’t fulfill them even to his own tribe. Let us vote for someone who sees all tribes as equal.

Got any peace message? Send us using our contact form HERE
© nairobiwire.com

Ipsos Poll: Uhuru Now In The Lead as Dida Overtakes Kiyiapi < Previous
An Old Photo of DJ Kaytrixx.. Without Dreads Next >
Recommended stories you may like: