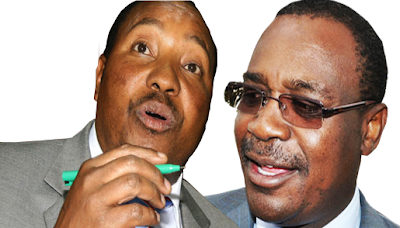 On Sunday night, Nairobi Gubernatorial candidates Ferdinand Waititu and Evans Kidero were hosted by Julie Gichuru on her show Sunday Live, where they gave us a preview of what to expect in the presidential debates.
What was to be an interview ended up being a debate, with both issues and character on the table. It was going quite well with the ODM candidate and his TNA counterpart explaining how they will move Nairobi to the next level. The former Mumias Sugar CEO tried to explain in details, while the immediate former Embakasi legislator emerged as either lacking statistical facts or choosing not to use them. Both candidates also had some minutes to blow their trumpets.

At some point, Waititu explained to Julie how he would change the education system in Nairobi, where he would have everyone go to secondary school, but allocated different classes depending on how they performed in class 8. He gave the example of how the best performers would be in Form 1A, the second best in Form 1B etc. That did not go down well with Kidero, who stated that the education system could only be changed by the central government. Due to that, discussion changed to whether Waititu understood the roles of a governor.

To conclude the interview, Julie asked the two to ask each other a final question, and Kidero went first. “If you become governor, should Nairobians buy helmets?” he asked. Waititu intelligently dodged the question concluding that for you to be governor, you must understand the governed. When it was Waititu’s turn, he asked Kidero about a court case concerning cane farmers, where the latter’s land is said to have been sold irregularly when Kidero was the CEO of Mumias Sugar Company.
The two were then made to publicly state that they would concede defeat, should they lose.

The debate attracted thousands of comments on social media, for which majority proclaimed Waititu the winner. However, many were not sure if the Embakasi law maker understood what he will be doing as governor, and whether he has what it takes to manage the city of Nairobi.
According to most comments, Kidero’s biggest minus was arrogance. Most did not doubt his capabilities to transform the city, but the fact that he looked down on Waititu during most of the interview (according to them), made him lose their votes. Below are some comments from Twitter.

I cannot vote for a person who looks down upon the poor and uneducated in the society.what will happen when you enter into power??kidero no

Kidero: I was born in Nairobi, went to UoN, i was in South Africa…… Waititu: Today in the morning at 10am I was in Kayole….

Clearly #Kidero remains my choice and he did well in the interview… If you are repulsed by his success! Deal with it!…

Kidero’s arrogance is not even an issue for me coz people like Donald Trump continue to yield results its more, it was his approach

As much as Waititu has gave me a good laugh tonight, I’m still voting for Kidero””

Kidero basing his strength on waititus illiteracy was jus a poor tactic from the guy,now he jus lost my vote

Kidero is the guy to make a lady laugh, but Waititu is the man to make the lady part her legs.”

My take on #Waititu and #Kidero after watching the interview on Sunday Live… Kidero might be a good manager..

#Waititu reminds me of Zuma, tapping the masses and Kidero of the intelectual Mbeki. And we know how that story ended.

just lost a chunk of votes simply by despising #Waititu,fire ua PR team and mind ua language,be humble even if u r educated.

We are the same lot that will complain after electing Waititu

kidero is arrogant… waititu is ignorant..

All these pro Waititu tweets are making me sad, don’t like Kidero but Waititu is no manager or strategic planner. We are doomed either way!!

Kidero for Governor, Waititu for PRESIDENT!

The hell is wrong with people sympathizing with Waititu just because Kidero was condescending Fuck that, i would too, Waititu is an idiot!

Nairobi’s 56% Kenya GDP. Just do the math and decide if you wanna entrust that with #Waititu or @kideroevans . This is a NO BRAINER!

Waititu is a people’s person who will fight for the Lower Income people but will he grow Nairobi’s economy/infrastructure?

Waititu rily needs someone to tutor him in English

Those accusing CitizenTV of being #cord tv, which party does Waititu represent?

Its clear the #Waititu doesn’t know the functions and limits of what he’s vyin for. SAD

from what i gather in fb and tweeps is that waititu is gettin woiye votes coz kidero was a bit arrogant.. Really?

@kideroevans you made yourself look bad. Everyone already knew you’re smarter than Waititu. Rubbing it in our faces was not very wise

We are under siege fellow Nairobians. We have to choose between ignorance and arrogance. Kidero is out of touch. Too risky to elect Waititu.

So, here we go, Who Do You Think Won The Sunday Live Debate?? (Vote below – Desktop only)