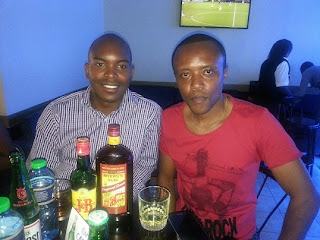 One of the biggest names in radio, Maina Kageni has announced that he is taking up a new job at the Nation Media Group.
In a very vague, very short and very viral statement, Maina wrote on his Facebook page, “Starting my new job at Nation Media Group tomorrow!!!!!!!!!!!”.
Despite pressure from fans to tell them more about this new job, the controversial presenter ignored their pleas and failed to reveal what it entails, and whether he is still at Classic 105.

Maina captured and refused to let go the morning radio market, with his ‘bare everything’ relationship/comedy morning show, Maina and King‘ang’i in The Morning, which has Daniel Ndambuki as his co-host. Late last year, he announced that he intends to retire from radio in June this year, in a move that generated mixed reactions.
It would therefore be surprising should he take up another radio job at the Nation House, but speculation is rife that he is set to be a newspaper columnist at NMG, specializing in sports articles.. or relationship articles.
His move may be timely, since NMG has just launched an English sports newspaper called SportOn, which will be published every Monday and Friday.
If at all his job description at NMG is to be a newspaper columnist, then his loyal Classic 105 audience should not panic just yet.

UPDATE:
Maina Kageni confirms that he will be a columnist for NMG‘s newest newspaper, SportON.
On a Facebook post this morning, Maina wrote,“#SportOn is the new magazine by the Nation Media Group that I’ll be columnist for. Catch me there on Page 3.