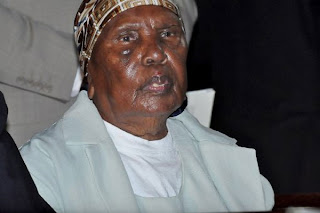 The mother of the late Internal Security minister George Saitoti has died, aged 89.

Zipporah Gathoni Musengi died at the Nairobi Hospital Monday night. She has been ailing for sometime.
Her death comes just six months after Prof Saitoti’s death.
Due to her failing health, Mrs Musengi was unable to attend her son’s burial at Enkasiti, Kitengela last year.
According to the late Saitoti’s brother Leboso Musengi, who spoke to the Nation on phone Tuesday their was admitted to Nairobi Hospital where she passed on Monday around 8 pm.
He did not disclose the cause of his mother’s death.
Mr Musengi said their mother is survived by eight children and several grandchildren.
“Our mother has been living in her home at Olkeri in Ngong,” he said.
The body is preserved at Lee Funeral home as the family makes burial arrangements.
Nation.co.ke
15 Things That Should Remain In 2012 < Previous
Wahu Goes Into Business: Opens Up Salon Next >
Recommended stories you may like: