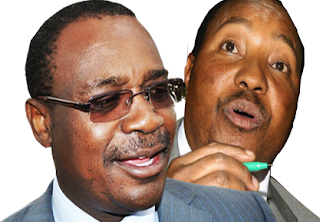 Last night, Ferdinand Waititu and Evans Kidero faced off on Sunday Live. What was meant to be an interview turned into a bare everything political debate. Both started attacking each other’s character. Kidero had issues with Waititu’s stone throwing habits, wondering aloud whether Nairobi deserves a stone throwing governor. Waititu on the other hand wanted answers on Kidero’s corruption allegations.

Social media was in the meantime leaning towards Waititu, with reservations however. They accused him of complete ignorance, with some going to an extent of calling names bordering the same. Kidero on the other hand was seen as absolutely arrogant, and proud. He knew his stuff yes, but the fact that he tried to humiliate Waititu, going to an extent of giving him that ‘you idiot’ look did not go down well with the majority.
The two were however very jovial on set, to the extent of exchanging a couple of jokes… And Kenyans took cue, because immediately after the debate, jokes started flying. Waititu was in most occasions on the receiving end. Here are a few.

Dr. Kidero : It’s an Honour to meet you sir.

Dr. Kidero: How did it feel being emancipated from literal hurdles and then winning the primaries?

Dr. Kidero : I expect imense competition and tremendous opposition from your cohorts Mr. Wititu. Do you hold synonical sentiments?

Dr. Kidero : Wow,cant wait to witness the masses enumerate this whole scenario and put it down in black and white………(Waititu Interrupts…)

I like the way Waititu starts the answer to every question with…”First & foremost”… na ni swali la kumi.

PLO LUMUMBA: i serruptiously instigated a navigation round the bearings.

I think Waititu and Jimnah shud just form a coalition. Jimnah will handle the office work and Waititu can handle the fieldwork.”

Julie gichuru to waititu: what wil u do to stem out corruption in nbi county?

Watitu: i will leave no stone unturned

on the bright side, waititu didn’t assault kidero…yet?

Kidero: I was born in Nairobi, went to UoN, i was in South Africa… Waititu: Today in the morning at 10am I was in Kayole….

“A thief disappears after beating a corner” ONLY #Waititu has the power to say that LOL.

Waititu made Kidero look arrogant. Aint easy discussing issues with some1 who doesn’t get them!

Waititu has ordered all his graffiti to be cleaned. halafu zianze na “First and foremost””

INTERVIEWER:Waititu Did u fail an English exam?

Waititu might clean the Graffiti on the city walls then put more graffiti saying “This wall was cleaned by Waititu”… Expect anything.

Kidero is the guy to make a lady laugh, but Waititu is the man to make the lady part her legs.”