Kingwa Kamencu To Get Married This Year, And You Can Apply To Be The Husband. Here Are The Conditions 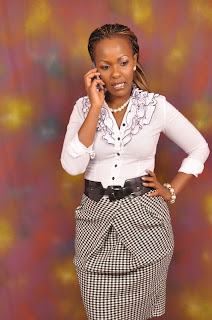 As ole Kiyiapi complains that the media is not giving him enough coverage, there is one candidate who knows how to keep the media on her trail. Kingwa Kamencu is back. Her underwear revolution failed to convince anybody to join, but she never gives up. She has now found a way to sneak back to Nairobi Wire’s top stories.
The presidential candidate or Madam President as she loves calling herself is ready to settle down. Yes, she’s getting married this year. However, there’s one problem, she hasn’t found a man yet… but she’s in the process of receiving husband applications.

If it were anyone else, we would have ignored the Facebook post as a joke, but this is not anyone else. This is someone who defends her Underwear Revolution on TV and other mainstream media. She’s definitely capable of anything. However, we’re not sure if she’s joking on this one.
If the application part is outrageous, wait and hear that the husband to be is going to take Kingwa’s name instead of the other way round. In simpler word Kingwa will be the surname or family name.
Here is the post.

In this new year, my inbox has been innundated by good men seeking to find out the progress of the First Gentleman Recruitment Programme. The update is that Madam President can confirm that this indeed is the year in which she will Get Married and Settle Down (and thus gladden her mothers heart to no end). There is however a certain clause all applicants must agree to comply with if they are succesfully accepted as the candidate for said marriage.

Below are a few reactions to the above post.

Crazy gal it has happened to Ongoro Elizabeth’s husband before; i was shocked when the man was clobbered and hospital that the name he carries is that of his wife  – Dinaf Kennedy

Are you going to follow Zuma’s example and recruit a second, third and fourth gentleman as well?  – Justin Pearce

My advise to that man is run away very fast and look for the nearest exit door before saying “I DO”…Because that is not the God Ordained Order …the HEAD DOESN’T COME AFTER THE NECK…its is the other way round ..the NECK to hold HEAD(Man)..otherwise it will be very ugly:-)  – Paul Dalizu

What a man can do, a woman can do better. Good luck Madam President. BTW, out of curiosity, how many proposals have hit your inbox. Please……  – Fred Gori