By Ken   /   Tuesday, 08 Jan 2013 09:59PM   /   Leave a Comment
Video has emerged of Kenyan runner Edwin Kipsang Rotich being tackled by a member of the public before he went on to win a 10km race.
Rotich was immediately assisted by the local police during the annual Kings Run through the streets of Brazilian city Cuiaba
Despite the ambush, the Kenyan, who won the renowned Sao Silvestre Race in Sao Paulo a little over a week ago, kept his lead and crossed the finish line in first place.

The attacker was 33-year-old Wallace de Sousa Nogueira, whom police said has a history of mental problems.
“He has a history of performing acts like these in the past, he’s someone with (psychiatric) problems,” said the local police officer who arrested him afterwards. 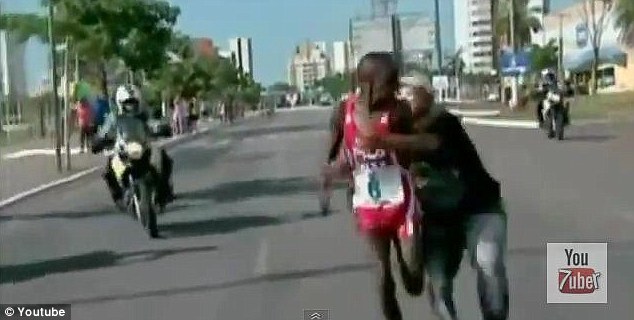 A Kenyan’s Guide To Kenya (Hilarious) < Previous
Columnist Tells Makau Mutua To Stop Exaggerating Consequences of Electing Uhuru Kenyatta Next >
Recommended stories you may like: