A Kenyan’s Guide To Kenya (Hilarious) 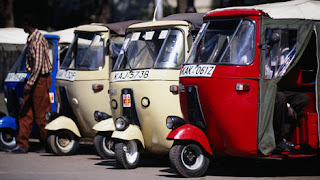 I’ve often been terribly disappointed by the tourist guidebooks written about Kenya. Most of the time they tell you stuff you already know, like “you can go on safari and see some lions.” That’s probably why you wanted to come here in the first place, so that’s not helpful. Other times they give you all manner of useless information. For example: what’s the point of telling you how to ask for directions in Kiswahili if you’re not going to understand the answer? (Sometimes they seem to be written by a malicious Kenyan who hates tourists. One time I was taking a walk at the beach alone and was accosted by an earnest American who said, “Jambo. Nyinyi muna kula viazi?” First of all, no Kenyan says “Jambo.” Secondly, I was alone and I definitely wasn’t eating potatoes.)
These books never tell you about all the amazing people you can meet in Kenya, or how to understand what they’re saying. Determined to correct this horrible wrong, I’m issuing the first of many useful, practical tips for our many visitors. Here with Volume I of “A Kenyan’s guide to Kenya.” (Disclaimer: this is written from a Nairobi perspective. Other parts of the country are a whole other story and will cost you extra.) Here’s what you should know:

1. When we want you to pass us something – the salt, say – we’ll point with our mouths. Example: We’ll catch your eye then say, “Nani.” Then we’ll use our mouths to point at the desired object. This is achieved by a slight upward nod followed by an abrupt thrusting out of the lower lip, which is pointed in the object’s general direction. There’s no explanation for this. (“Nani” can be roughly translated as, oh I don’t know, “Whats-your-face,” “You,” or “Thingie.” We’re unfailingly polite.)

2. Frequently, and for no reason whatsoever, we’ll refer to a person as “another guy.” However, this MUST be pronounced/slurred thus: An-aa guy. This also applies to “the other day,” which is when some momentous event in our lives always took place. We do the same thing with Kiswahili words like ‘bwana’, which is pronounced ‘bana.’ Example: “I was driving in town the aaa day and this guy comes from nowhere and cuts me off, bana. Man I abused him!” ‘Abused’ in this sentence must be drawn out and emphasised for maximum effect: a-BUSE-d.

3. We claim to speak English and Kiswahili, which technically means that we should be able to communicate with the English-speaking world and Tanzania. What we really mean is that if you’re not Kenyan you won’t understand a damn word we say or why we say it. Example: “Sasa” in Kiswahili means “now.” We use it as a greeting. Correct usage: “Sasa?” “Ah, fit.” It confuses us that Tanzanians don’t understand this.
We also, just as randomly, might greet you by saying, “Otherwise?” Common response: “Uh-uh.” There is no explanation for this.

4. Kenyans are multi-lingual, but all this means is that we believe that if we translate something word for word from one language to another it will make sense. A Kenyan might say, for example, “You mean you’re not brothers? But you look each other!” Be kind, they just think that muna fanana can slip into English unfiltered. Speaking of filters, that’s why some people (tribe/ethnicity withheld to protect my uncles) will claim to ‘drink’ cigarettes. If you’re not Kenyan you won’t understand this. Let it go.

5. We can buy beers at police stations. Grilled meat too. Heck, in some cop shops you can even play darts. I am NOT making this up. Example: “Man the aaa day I pitiad (pass through) the Spring Valley cop station after work. I was leaving there at midnight, bana. I was so wasted! I told those cops to just let me go home.”
Oh, that’s another thing: when we’re leaving a place (your house, a wedding, the cop shop bar) we tend to say, “Ok, me let me go…” We’re not implying that you’re holding us against our will; we’re just saying that we’d like to go. (The plural is, of course, “Us let us go.”)

6. When Kenyans say that you’re mad, it’s a profound compliment. “Man this guy is mad. You know what he did…” then they’ll go on to recount some of your admirable exploits. It’s high praise. Smile modestly and accept it. By modest I mean look down, draw a circle in the dust with the toe of your shoe (or just your toe) and then smile, draw your mouth down into a brief frown, and smile again. Alternate quickly a few times. This is known by English-speaking Kikuyus as The Nyira Smile, or The Sneering Smile. Then say “aah, me?” in a high, sing-songy voice. However, only do this if you’re female.
On the other hand, if Kenyans ask, “are you normal? (Sometimes pronounced “nomo”), then they’re getting a bit concerned about your state of mental health. Reassure them by buying another round.

7. Which brings me to Alcohol. Our national pastime. You know that myth about Eskimos having thousands of word for ‘snow?’ Well, our beloved drinks are known by a thousand names and phrases too. Kenyans will ‘catch pints (or just ‘catch’),’ ‘go for a swallow,’ have a ‘jweeze,’ ‘keroro,’ ‘kanywaji,’ ‘jawawa…’ really, no list can be exhaustive. Be aware, though, that the words you use will immediately tip off your audience about your age. (For the Kenyans reading this, no I was NOT born during the Emergency, you swine.)

8. Our other pastime is religion. (What contradiction?) If you’re broke on a Sunday – and your hangover is not too bad – stroll over to one of our parks and catch some open-air preaching. Jeevanjee Gardens in town is a prime location. There you will see us in our full multi-lingual, spiritual splendour. There is always, and I mean always, a freelance preacher thundering in English while his loyal and enthusiastic sidekick translates into Kiswahili.
Sample:
Preacher: And then Jesus said…
Sidekick: Alafu Yesu akasema…
Preacher: Heal!
Sidekick: Pona!
Preacher: HEAL!
Sidekick: PONA!
It’s hypnotic. We suggest you go with a Kenyan who understands both languages because sometimes the sidekick nurses higher ambitions and, instead of translating, tries to sneak in his own parallel sermon. If you’re bored in Kenya it’s because you’re dead.

9. As you’ve probably figured out, we like abbreviating things. (Why would the word ‘another’ have to be any shorter than it is? Why would the Kenyans reading this find it odd that I keep talking about ‘Kiswahili?’) This can lead to unnecessary confusion. But by now you should have figured out that when you’re catching and someone says, “Si you throw an-aa ra-o?” they of course want you to buy another round of drinks. Don’t worry about the ‘si;’ like so many words in Swa it’s impossible to translate. Embrace it, sprinkle it liberally in your speech and move on.

Wahu Goes Into Business: Opens Up Salon < Previous
Kenya’s Edwin Kipsang Tackled During Race In Brazil.. But Wins Anyway (VIDEO) Next >
Recommended stories you may like:

The Trending Memes and Tweets in Nairobi Today