Inspector General David Kimaiyo Still Has No Office or Uniform 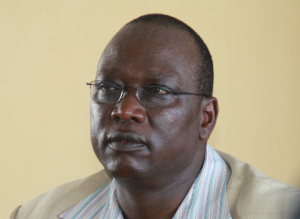 One week after being sworn in, it is emerging that the new Police Inspector General David Kimaiyo is facing more confusion than he anticipated. Till now, the small matter of his uniform has not been settled but he looks fine wearing suits.
Being the first person to be in charge of both the regular and administration police, a balance has to be struck as to what he’ll wear, considering that the police commissioner and AP commandant had very different uniforms. He cannot just pick one of the two as it may trigger discomfort and silent rebellion within the ranks of the other.

Apart from the uniform matter, it is also emerging that Kimaiyo has not settled in his official office, because again, he has a choice of two. He is currently operating at the Kenya National Focal Point on Small Arms offices at Bruce House; what should now be his ‘previous workplace’. The AP Commandant had his office at Harambee House, with the Police Commissioner having his at Vigilance House. Until a neutral office is found, Kimaiyo will continue leading the two forces from Bruce House, and probably still in civilian suits.
© nairobiwire.com

Wedding Show Host Noni Gathoni Defects To Kiss TV < Previous
Kibaki, Raila, Uhuru, MaDVD, Kalonzo and Ruto In A Matatu Next >
Recommended stories you may like: