Google, Huawei, Samsung, Boeing And Other Companies Set To Build In Konza City 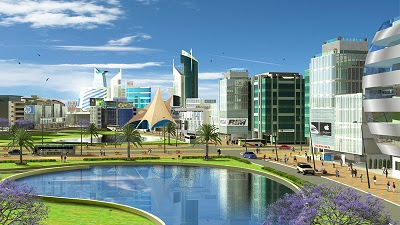 The Konza Technopolis has attracted major local service industry players, boosting its chances of success as foreign firms also line up for space in the project dubbed “the African Silicon Savannah”.

Fourteen large firms have expressed interest in the first stage of the Konza Technology City project set to be carried out in four phases of five years each.
The local firms setting up at the Sh26 billion project include Safaricom, Wananchi Online, Kemri, Kari, the University of Nairobi, the Jomo Kenyatta University of Agriculture and Technology and the Nairobi Hospital.
Foreign concerns include the fast-growing Chinese Huawei Technologies, Korea electronics giant Samsung and Telemac of the US. Research In Motion (RIM) of Canada, the makers of the Black Berry phone, are also interested according to Information permanent secretary Bitange Ndemo.
Others are Google, Craft Silicon, Telemax Technology Corporation of Taiwan and Shapoorji Pallonji Group from India.
It is understood that US plane maker Boeing and courier firm Fedex are being courted to set up operations at the city where the government is shortly set to invest billions of shillings on infrastructure. The US corporates pulled out over land acquisition challenges.
“The 14 are willing to start work immediately,” said Dr Ndemo during the official launch of the 5,000-acre project by President Mwai Kibaki at the site 60 kilometres South-East of Nairobi Wednesday.
Mr Kibaki launched the new integrated city and expressed the government’s commitment to building basic infrastructure, including extending the dual carriage road from Athi River, provision of electricity from a new multipurpose dam and a high-speed railway to the Jomo Kenyatta International Airport.
The flagship project under the Vision 2030 economic blueprint is set to position Kenya as the Information Communications and Technology (ICT) powerhouse in eastern Africa.
It will house an international financial centre, a convention centre and light electronic manufacturing plant.
“The techno city, a standard gauge rail and the Sh200 billion Lapsset project are four flagship projects expected to drive the Vision 2030,” said James Mwangi, chairman of the Vision 2030 implementation board during the ceremony.
Mr Kibaki challenged the next government to continue the momentum in building infrastructure projects through increased investments across the country.
“Think of building the next city and the next road in the country. Let us invite and encourage investments and to continue the current rate of development,” he said at the launch.
The city is meant to be part of the Special Economic Zones that will replace the Export Processing Zones and hopefully create some 200,000 jobs.
It will be developed under a public/private partnership (PPP) model with structures in the ICT Park and a 10-kilometre radius being controlled as will those to be built on Mombasa Road.
The President said planning controls would be strictly enforced across the two districts of Machakos and Makueni.
“We have already put in place the required ICT infrastructure that includes submarine and terrestrial fibre optic cables,” he said.
“The project has moved from just an ICT park to a technology city. This will help converge the planning by various ministries,” said Patrick Obath, chairman of the Kenya Private Sector Alliance (Kepsa).
The two-lane carriage way extension from Athi River to Konza is scheduled to start in January 2014 to be completed by 2016.
It will be undertaken in two phases with the first starting from Athi River to the Machakos turn-off being partly funded by the World Bank and the next from Machakos turn-off to Konza.
Construction of a standard gauge railway from Mombasa to Malaba, which incorporates the Nairobi-Konza segment, is also scheduled also start soon following completion of the feasibility studies and preliminary designs.
The AfDB has also given Sh16 billion for the construction of the multipurpose Thwake Dam to supply water and power to Konza. The Dam will also provide water for irrigation.
The board of the Konza Technopolis Development Authority, the state firm expected to guide the search for investors and cash for the tech city, has already been appointed.
It will act as a link between the master developer and the government. Four directors including building economist Haron Nyakundi, architects Reuben Mutiso and Emma Miloyo and Rosemary Maundu sit on the board.
The team was inaugurated last week with investment banker John Ngumi as chairman. The Information and Finance permanent secretaries will also be represented in the board.
The team expected to recruit a CEO soon will be in charge of regulating, monitoring and evaluating the development of the multi-billion-shilling ICT Park. A master developer to be unveiled in February will steer the construction.
“We want to become a centre for exporting products to all parts of the world in order to make progress,” said Kibaki, adding that the city would be a game-changer in Kenya’s socio-economic development.
It is expected to spur massive trade and investment as well as create thousands of employment opportunities for young Kenyans in the ICT sector. Besides technology companies, it will also be home to hotels as well as world-class educational and health institutions.

Racism At Razco Ltd Nairobi – Makers of Lyons Maid < Previous
Wanjiru Makes Raila Cry, As Sonko Does Nothing. This Week’s Funniest Pictures Next >
Recommended stories you may like:

The Rise of Crypto Casinos in Kenya: Advantages and Risks