Ferguson Watches Wanyama In Action.. Is The Kenyan Headed To Manchester? 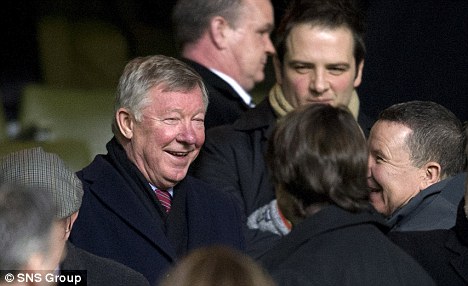 As his Manchester United side prepare for this weekend’s FA Cup clash against Fulham 4,500 miles away in Qatar, Sir Alex Ferguson returned to his Glasgow roots to watch Celtic’s 4-0 victory over Dundee United.
The Old Trafford boss was spotted in the Parkhead crowd as Neil Lennon’s SPL leaders romped to an emphatic SPL win with Kenyan midfielder Victor Wanyama putting in a stand-out performance.
United are believed to be among a host of potential suitors for the 21-year-old, who struck the hosts’ second goal of the evening in the 33rd minute.
Lennon is keen to keep hold of Wanyama, who arrived at the Scottish club from Belgian outfit Beerschot in 2011 and has played an instrumental role in guiding Celtic into the knockout stages of this season’s Champions League.
Ferguson, meanwhile, will today pay his respects to Sean Fallon as the United manager attends the funeral of the Celtic legend, who was the assistant to Jock Stein when they won the European Cup in 1967.
MailSports

How To Know It’s A Nollywood Movie.. Reloaded < Previous
Gangnam Style Earns $8 Million On YouTube Next >
Recommended stories you may like: