Churchill Live is Back – Premieres This February 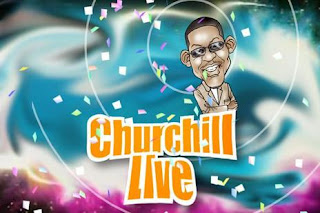 The much loved, award winning show Churchill Live is finally back. The show has been on a loooong 2 year break, but it has now been confirmed that it will be on your screen this February.

Previous seasons of the show have attracted the who’s who in Kenya, with guests such as Prime Minister Raila Odinga, Vice President Kalonzo Musyoka, Deputy Premier Uhuru Kenyatta and his running mate William Ruto. Other high profile guests have included: Jeff Koinange, Desmond Elliot, John Kiriamiti among many others.
Churchill Live has also helped launched the careers of many comedians, among them Eric Omondi, MC Jesee, Ayeiya -poa poa, JB Masanduku among others.

Making the announcement yesterday, Churchill and his crew said that this season, the show will feature 50 established and upcoming comedians. Among them is non other than Ghetto Radio‘s Mbusi.
Despite all the rumours about the relationship between Eric Omondi and Churchill or his producers, the skinny funnyman will continue being on the show, in what he termed as ‘coming back home’.

Churchill Live will still be aired on NTV, and this time round, there is a pleasant surprise. It will air twice a week. Yes.. two days in a week.
It’s traditional time slot of 7:30 to 8:30 PM on Thursady remains, with another episode airing on Monday from 7:30 to 8:00 PM. The Monday episode has been dubbed ‘Churchill Raw’, and it will feature the various acts that will not make it to Thursday’s show. The future of JB’s Comedy Club, which takes up that time slot remains unclear.
© nairobiwire.com