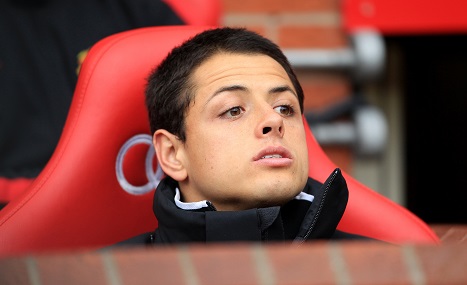 The Spanish side are ready to pay up to €18 million to land the Mexican in the summer and make him the focal point of a new-look strikeforce.

Falcao is one of the hottest properties in Europe and almost certain to leave Atletico Madrid at the end of the season amid serious interest from Chelsea, Manchester City and Paris Saint-Germain.

Arsenal are preparing a fresh bid for Adrian, Falcao’s strike partner at the Vicente Calderon, having already made an offer worth €12m after tracking the Spanish forward for a number of weeks.

Atleti are resigned to losing both players – with Adrian likely to leave this month should the Gunners make a bid approaching the €17.7m release clause in his contract – and have made Chicharito their top target.

A transfer in January is described by sources as virtually impossible, but United are willing to listen to offers for the Mexican as they eye a move for Borussia Dortmund striker Robert Lewandowski.

Chicharito signed a new five-year contract in October 2011 but the 24-year-old has fallen behind Robin van Persie, Wayne Rooney and Danny Welbeck in the pecking order at Old Trafford.

The Mexican has scored 12 goals in 22 appearances for United this season but has mainly been restricted to a role as a substitute for the Premier League leaders, with Atletico Madrid ready to offer him a regular starting role.

He is considered the most fitting long-term replacement for Falcao as a natural goalscorer. The Colombian striker has been in stunning form this term, netting 21 times in 18 matches, and prompting clubs consider triggering the £48m buyout clause in his contract.

Chelsea remains the most likely destination for the 26-year-old and the Blues have been in contact with Atletico and the player’s representatives for several months as they attempt to pave the way for a summer deal.

Chicharito is also an instinctive goalscorer who has made an instant impact following his £7m move to United from Guadalajara in 2010 and has been identified as a fitting replacement for Falcao and Adrian.
Goal.com

Karua Hints That CORD Is Sponsoring Infotrak As Jubilee Sponsors Synovate < Previous
Very Funny Video of Kikuyu Version of The Flintstones Next >
Recommended stories you may like: