IT’S a photo that will enrage hard-working football fans across Britain. 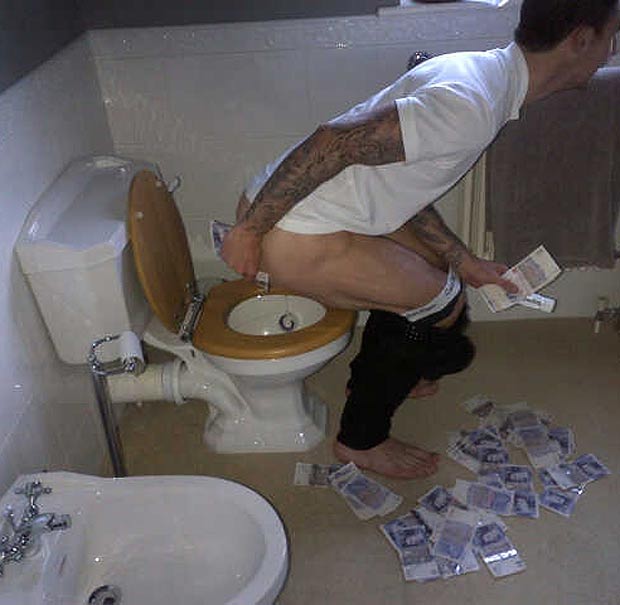 West Brom defender Liam Ridgewell, 28, squats over a toilet and wipes his backside with a wad of £20 notes.
Scattered on the floor in front of him are dozens more £20 notes, totalling almost £1,000.
The Premier League star, who earns at least £20,000 a week, is apparently using the cash instead of toilet roll.
He claims the sick stunt was simply a “joke” to wind up a friend — but it will infuriate more than just his pal.
Ridgewell’s weekly wage is equivalent to the average annual salary in the West Midlands — one of the most deprived areas in the country.
The disgraceful snap — taken in the bathroom of Ridgewell’s £1.5million home in Barnt Green, Birmingham — was sent to The Sun by a West Brom fan who asked not to be named.
He said: “The people of West Bromwich earn a fraction of what this idiot earns yet he makes a mockery of his good fortune like this. It makes me sick.
“We’ve always thought footballers were arrogant, overpaid buffoons and this just proves it.”
Ridgewell, an unused sub in his side’s 1-0 defeat to Stoke yesterday, apologised last night.
He said: “The photo was taken in the privacy of my home around eight months ago as a joke to wind up a mate, who I had just won a personal bet with.
“I only intended him to see the photo but now it’s public, I can understand how it will be viewed. I am sorry for any offence it causes.”
A spokesman for West Brom, currently fifth in the Premier League, said: “This is a private issue for Liam that has become public.
“It does not put the club in a good light and we will deal with the matter internally.
“Since Liam joined us 11 months ago, his conduct on club duty has been exemplary.”
West Brom fans at yesterday’s home game at The Hawthorns were shown the picture — and most reacted with disbelief.
Carpet fitter Ryan Walker, 24, said: “It’s insensitive to fans who have to scrape money together just to see him play.
“You wouldn’t catch me doing that with a £20 note.”
Painter Robert Jones, 38, said: “Even though he did it for a bet he should give a bit more thought to what kids who see it might think.
“It’s not doing much for the image of footballers.
“I’d be interested to hear what the Queen has to say about it too. He’d have been hung for that 100 years ago.”
But engineer Warren May, 44, said: “It’s up to him what he does — he’s just having a laugh.”
Ridgewell split from fiancee Kirsty Maclaren last year — eight days before their wedding.
The Sun

Exclusive: How Mwaniki Got The Big Government Contract < Previous
Facebook To Buy Whatsapp. Next >
Recommended stories you may like: