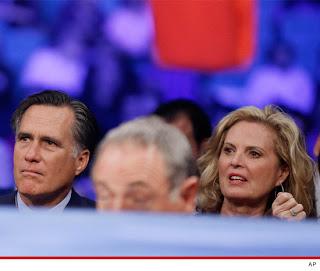 A month after losing the 2012 presidential election, Mitt Romney and his wife, Ann, were ringside in Las Vegas on Saturday night to watch as Manny Pacquiao was knocked out by Juan Manuel Marquez in the sixth round of their welterweight bout.

The image of the former Massachusetts governor, his mouth agape at the sight of Pacquiao face down on the canvas, was seen briefly on the HBO telecast and posted to Twitter by Buzzfeed’s Andrew Kaczynski.
According to the Associated Press, the Romneys were guests of Nevada State Athletic Commission chairman Bill Brady, who hosted a fundraiser for the Republican nominee during the campaign.
Before the fight, Romney met Pacquiao in the fighter’s dressing room at the MGM Grand, according to the New York Times, which described the “surreal” exchange:

In came Mitt Romney. Yes, that Mitt Romney, the former Massachusetts governor and the presidential runner-up, every hair on his head in place. Romney, in fact, came in twice. His introduction was at once awkward and hilarious.
“Hi, Manny,” he said. “I’m Mitt Romney. I ran for president. I lost.”

Pacquiao then followed suit.
“I got hit by a punch I didn’t see,” he said.
A Luo Man Romantic Love Letter < Previous
Former NTV Anchor Basett Buyuka Weds (Pictures) Next >
Recommended stories you may like: