Manchester United And Arsenal Set To Swap Nani And Walcott 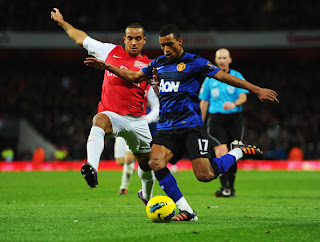 Manchester United have joined the race for Arsenal rebel Theo Walcott in a move similar to Robin van Persie’s controversial switch to Old Trafford in August.
Sir Alex Ferguson is keen to land the England winger, whose deal expires at the end of the season.
Sportsmail understands that should Walcott leave Arsenal, his first choice would be United.

Walcott is declining to sign a five-year deal worth £75,000 a week, while formal talks over fresh terms have not taken place since August 28.
He is said to be keen to stay but wants a deal closer to £100,000 a week.
Liverpool, Manchester City and Chelsea are all interested, but United’s keenness, along with Walcott’s desire to join the Barclays Premier League leaders looks, looks to have put United in the driving seat.
At the same time, Arsenal manager Arsene Wenger is exploring a January swoop for United misfit Nani, raising the chance of a swap deal with Walcott.
Arsenal will look to sell Walcott next month if a new deal is not agreed by December 31, but the ex-Southampton man will not be forced out and will only move to a club that suits him.

Liverpool manager Brendan Rodgers will bid for the forward in January, but United’s interest has changed the landscape of Walcott’s future.
Likewise, Chelsea and City are keen but would prefer to sign him on a free transfer next summer.
Walcott could be available for as little as £8million given he has just six months left to run on his deal.
Sportsmail

Mutula Kilonzo And Esther Murugi Nominated For The Gay and Lesbian Awards < Previous
Eric Omondi’s Baby Girl That Never Was Next >
Recommended stories you may like: